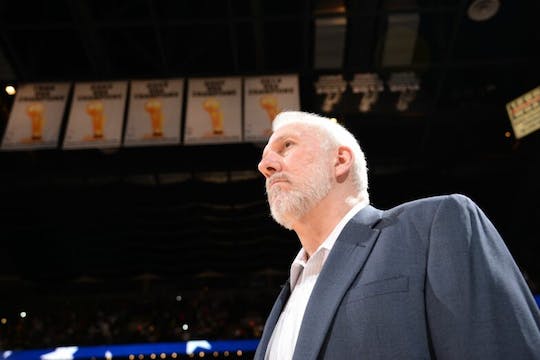 The number 1,336 is quite minuscule in the grand scheme of things. But if I asked you to count from zero to 1,336, that number becomes significant.

For all the current and future NBA coaches, the number 1,336 represents a standard of longevity, consistency, and success. For the man who owns that number, it is just another day in the office. But everybody else sees it as a culmination of his life’s work.

With over 20 years of coaching, Gregg Popovich is an institution in the NBA. He’s been at the top, the bottom, and everything in between. Popovich prides himself on recognizing and enhancing young talent. The multiple Hall of Famers who played under him is proof of that.

Five NBA titles, three Coach of the Year Awards, and an Olympic Gold Medal, he is arguably on the Mount Rushmore of coaches in the world. It wouldn’t be surprising to see Pop walk away from the sport soon with his legacy already intact.

The Spurs are always in the top echelon - not only in winning but as a team with the most international players. Even before Pop became a head coach, the NBA has had foreign players in the league. In the late ‘80s, Pop went to Cologne for the European Championships to scout talent. The only other NBA coach who was there with him was Don Nelson, the guy he just passed on the all-time coaching wins list.

Guys like Toni Kukoc, Dikembe Mutombo, Arvydas Sabonis, and Drazen Petrovic, to name a few, passed through the league. But back then, international players were a minority in the league.

I remember every time I would watch the Spurs, I would see so many different European names on the team. During the 2014 finals, I remember players holding their country’s flags during all the festivities. There were so many international players that I couldn’t even name them all.

Fast forward to the present, some of the best players in the league today are international players. Without Pop, this movement may have taken years to get to where it is now.

To thrive in the league for over two decades, you would need to adjust. When Pop was starting as a coach, the game was more physical and the league was dominated by big men. It suited players like Tim Duncan, Shaquille O’Neal, and Patrick Ewing. Then eventually in the 2000s, the game became all about guards and corner 3s. The 2010s, meanwhile, saw the formation of the Big 3s and the beginning of the 3-point revolution that we see today.

Adjusting to one style of play is difficult, but being able to do it multiple times and consistently succeed is why Popovich is a coaching genius.

Pop is the epitome of consistency. You don’t get to 1336 wins by having one or two great years. It has taken him over 20 years with the Spurs franchise to achieve such a number. Over that span, they only missed the playoffs three times. Pop has a win percentage of 66.7%, which means he has won two of every three games he’s coached. He’s managed to do this despite the roster turnover, injuries, rest, and many more uncontrollable factors. He’s found a way to continue succeeding.

Honestly, even without this record, Popovich has already cemented his place among the all-time greats. Most fans have conversations about who the GOAT is between LeBron James, Michael Jordan, and Kobe Bryant. But some also debate on who is the greatest coach of all time between Red Auerbach, Pat Riley, Phil Jackson, and Popovich.

This all-time coaching record of 1,336 wins may push Pop to the top, but instead of debating, I’d rather just sit back and enjoy watching Pop do what he does while he’s still doing it.