10 key questions: Is Brooklyn the team to beat?

Brooklyn's star trio and deep roster of scorers and role players give it a serious shot to win the East in 2021-22. 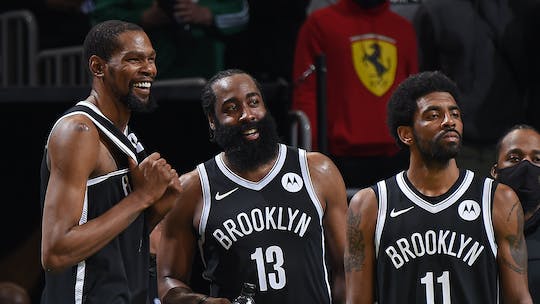 For the next 10 days, we’ll be answering one key question surrounding the 2021-22 NBA season. Here’s question four:

The Brooklyn Nets are clearly the team to beat in 2021-22, agree or disagree?

Disagree, if only because I respect defending champions, at least until they’ve lost, y’know, a game or two. The Milwaukee Bucks will reap some benefits from having endured and triumphed, regardless of personnel changes. Other teams in the East have improved, from the looks of it. And the Nets — regardless of how formidable they appear to be on paper — still have to show it on the floor. Over the long haul.

The biggest questions about Brooklyn still hang over its biggest stars. Can they stay healthy? If so, can all three — Kevin Durant, James Harden and Kyrie Irving — not merely co-exist but thrive in some sort of cohesive fashion. And what can Durant, Harden, coach Steve Nash and the rest of them expect from Irving, as far as showing up literally and figuratively? That’s been an issue for the point guard, whose distractions become the Nets’ distractions.

Beyond those caveats, Brooklyn does look to be loaded, much deeper than when Harden’s and Irving’s injuries doomed them against Milwaukee in the conference semis. Sure, the birthdates on this roster make them look like Lakers East, with eight players age 30 or older, including five who will be 33-plus by Sept. 29 (Durant’s birthday).

But the vets still can play, including new arrival Patty Mills, who brings feistiness and shooting to supplement Joe Harris and Durant. Bruce Brown broke through in the playoffs. Paul Millsap and LaMarcus Aldridge can pull shorter shifts with Blake Griffin and any two of the Big Three is plenty to win on most nights. So yeah, a team to beat, maybe even the team to beat. Just not ready to concede the clearly part until we see them dominate this season.

Get ready for the 75th anniversary season with a by-the-numbers look at NBA history.