Several youngsters made impressive marks in their rookie seasons, but a select few could really break out in the upcoming season. 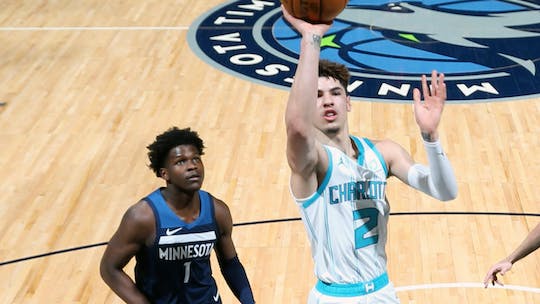 Which second-year players do you expect to thrive this season?

The rookie class of 2020-21 was awfully impressive, and there’s no reason they should slow down this time around. In particular, I like Minnesota’s Anthony Edwards to go onward and really upward, especially with reports that he has grown a couple of inches since the Timberwolves’ season shut down in May. His improvement over the second half of the season had him seriously challenging for the Kia Rookie of the Year that Charlotte’s LaMelo Ball seemed to have tucked away in the opening weeks.

Ball figures to be better, too, as the Hornets’ engine, assuming he can avoid losing 21 games to injuries and another 20 to bench duty to start last season. Having Gordon Hayward healthy too would help, though the rest of the Charlotte roster (aside from Terry Rozier) will rely on Ball to draw out their best selves.

Then there’s Tyrese Haliburton, who walked in with the Sacramento Kings mature beyond his years and should be even more confident and consistent this season. Haliburton’s greatest strength/weakness is how hard he is on himself, which isn’t always productive with games coming fast in season but is a great way to navigate an offseason. He put his role on the USA Select Team to good use in gauging his summer work.

Detroit’s young core includes Saddiq Bey, Isaiah Stewart and Killian Hayes around new No. 1 pick Cade Cunningham, and they’ll get to play – and perform –as big brothers to the rookie. Keep an eye on Golden State big man James Wiseman, too, whose spotty rookie season was cut short by injury, but whose 39 games with the Warriors is a lot more than the three he logged in college at Memphis.

Which team is poised for a breakout season??

Can Hawks build on their playoff success??

How can Zion improve his game next season??

How will Kidd help Doncic in Dallas??

Will experience push Lakers to top of West??

Are the Nets clearly the team to beat??

Can the Suns return to The Finals??

How can Lowry help the Heat??

What will be the Bucks’ biggest challenge??