Here's a list of things we want to see during the NBA Finals between the Milwaukee Bucks and Phoenix Suns. 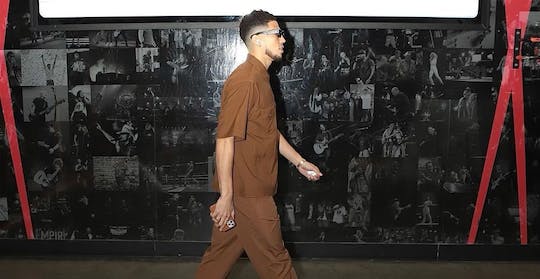 The Milwaukee Bucks and Phoenix Suns finally reached the biggest stage in the NBA, going head-to-head in a seven-game series for the Larry O'Brien trophy.

Here's a list of things we want to see during the NBA Finals.

CP3 and Coach Monty’s relationship goes way back to their New Orleans days before Paul moved to Lob City. Succeeding stints in Houston and Oklahoma City didn’t end in trophies for the point guard/god, but joining his former coach in Phoenix did.

CP3 adds Western Conference champ to his CV with one more trophy on the table. If the Phoenix Suns pull it off, it’ll be the perfect CP3-Coach Monty moment we didn’t think we needed.

The Milwaukee Bucks will always be Giannis Antetokounmpo’s team, and it’s not okay. Khris Middleton equally deserves all the attention and respect that Giannis gets.

What he did in the last couple of games in the Eastern Conference finals without Giannis is enough proof. It’s good that he now goes by a fitting nickname (“Kha$h”), but this Finals series will truly put a spotlight on just how good he is. It’s about time.

Devin Booker’s moves have always been smooth no matter who’s in front of him. His outfits in the pregame runway though? Much, much smoother.

The wish is that in his first-ever finals appearance, Book takes it up a notch and racks up style points in every pregame. He’s sure to rack up actual points in every game, anyway. Looking good doing it wouldn’t hurt.

The series hasn't even started yet and already the Sneaker King PJ Tucker pulled out a surprise.

At the Milwaukee Bucks’ practice, Tucker wore his Kobe 1 Protro Devin Booker PE. It was a sight to behold, seeing PJ in a Bucks shirt with his bold, purple sneakers popping out.

What else does he have in his sneaker closet?

The lockdown defense will always be there, but what makes it extra is when Jae whips out the dance moves.

Hoping he won’t get T’d up for it this time.

Who are we kidding? The ultimate wish we all have—whether you’re a Bucks fan or not—is to see Giannis play at full strength at the finals.

That’s likely not going to happen because did you see what happened? But crazier things have happened in this year’s playoffs and there’s no one freakier than the two-time MVP.

If he does suit up in the finals in whatever capacity, it’ll be a dream series between two teams who will be limping and crawling their way to the championship.