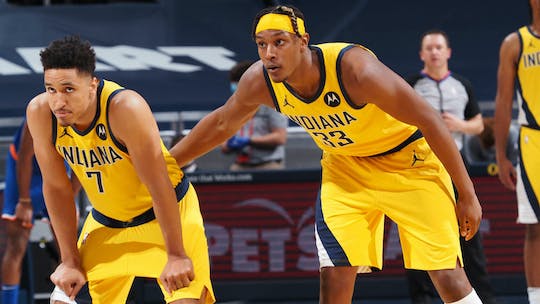 As we close in on the official trade deadline (March 25, 3 p.m. ET), keep up with the latest rumblings around the NBA — and the latest deals that have been agreed to — as deadline day approaches.

Report: Heat, Knicks reluctant to offer top packages for Oladipo
Victor Oladipo started 2020-21 with the Indiana Pacers, got dealt to the Houston Rockets in the James Harden mega-trade and, per ESPN’s Adrian Wojnarowski, could be on the move again. The Miami Heat and New York Knicks are pursuing the former All-Star, but are hesitant to offer a “premium package” for Oladipo, Wojnarowski reports. One thing that seems clear, however, is that Houston — per ESPN — will likely part with Oladipo before March 25. This season, Oladipo is averaging 21.2 ppg, 4.8 rpg, 5.0 apg and 1.2 spg with Houston and turned down a reported two-year extension with the Rockets back in late February.

Pacers reportedly listening to offers for Brogdon
As mentioned below, the Indiana Pacers would need a lot of incentive to part with center/forward Myles Turner. That may not be the case with starting point guard Malcolm Brogdon, writes Vincent Goodwill of Yahoo Sports. He reports the Pacers could be willing to part with Brogdon as they feel Caris LeVert can handle the point guard duties. The LA Clippers could be a potential suitor for Brogdon, per Yahoo Sports. Additionally, Indiana could be willing to move Aaron Holiday, too.

Will Aldridge and Drummond get dealt?
Former All-Star big men Andre Drummond and LaMarcus Aldridge are technically still members of the Cavs and Spurs, respectively. However, neither has played in weeks as their teams try to find new landing places for them. Jake Fischer of Bleacher Report reports that the Boston Celtics, New York Knicks, Dallas Mavericks and Chicago Bulls have shown interest in Drummond, while the Celtics and Miami Heat are interested in Aldridge. However, the hefty contracts both players sport continue to make them perhaps more likely to be bought out (and sign wherever they wish) than traded on or before March 25.

Pacers aren’t shopping Turner, per report
In terms of total blocks and blocks per game, no one in the NBA this season is better than the Indiana Pacers’ Myles Turner. The center/forward is enjoying one of his best overall seasons (13.2 ppg, 6.5 rpg, 3.4 bpg) and has Indiana in the mix for — at worst — a shot in the Play-In Tournament. J. Michael of the Indianapolis Star reports while the list of suitors for Turner is lengthy, Indiana would need to get a “no-brainer” trade scenario to part with him. Among the teams interested in Turner, per Michael, are the Charlotte Hornets, Los Angeles Lakers, LA Clippers and New York Knicks.

Blazers have reported interest in Cavs’ McGee
UPDATE: Vincent Goodwill of Yahoo Sports reports the Portland Trail Blazers are showing interest in McGee, but are in a tricky spot in getting him since regular starter Jusuf Nurkic should be on the way back soon.

Before the 2020-21 season began, the Los Angeles Lakers traded veteran big man JaVale McGee to the Cleveland Cavaliers in a small deal that few may have noticed. Yet McGee has been better than expected with the Cavs, averaging 8 ppg and 5.2 rpg and 1.2 bpg in mostly reserve minutes while carving out a solid role in the rotation. It is not likely he will be bought out, which means he will either be with the team going forward or be traded, writes Chris Fedor of Cleveland.com. The Cavs are happy with what McGee has brought to the team on a variety of fronts — playing time, mentoring and more — and are reportedly hesitant to move him.

Report: Magic want first-round pick for Gordon
UPDATE: The Magic, per Yahoo Sports’ Vincent Goodwill, are seeking a first-rounder and a young asset in return for Aaron Gordon. The Minnesota Timberwolves are interested in Gordon, but the Magic aren’t high on the Wolves’ offering of Jarrett Culver.

Orlando Magic forward Aaron Gordon has reportedly asked to be traded from there and it appears the Boston Celtics may be the current leaders to land him. Matt Moore of The Action Network reports several teams — including the Denver Nuggets, Dallas Mavericks, Houston Rockets and Portland Trail Blazers are in pursuit of Gordon. The Celtics have reportedly offered two first-round picks for Gordon, and the trade might also include swingman Evan Fournier moving to Boston as well. However, as with most things at this stage, these are mostly trade talks and all aspects of that remain quite fluid.

Grizzlies have decision to make on Dieng
The Memphis Grizzlies have some of the most intriguing frontcourt talent in the NBA with the likes on Jaren Jackson Jr., Justise Winslow, Dillon Brooks, Kyle Anderson and Brandon Clarke in that mix. However, they also have a potential trade chip in that mix in veteran center Gorgui Dieng, who is on the last year of his contract. Evan Barnes of The Commercial Appeal reports it seems more likely that the Grizzlies will buy out Dieng than trade him, but his situation bears watching over the next few days. In addition, Barnes reports the Grizzlies are highly unlikely to trade a rotation player, especially considering all the injury woes Memphis has dealt with this season.
Read Next
News