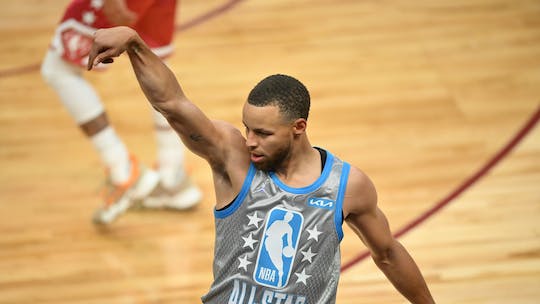 In an All-Star Weekend that put the spotlight on the legends while letting the new generation shine, it was LeBron James—someone who straddles both ends of the spectrum—who had the biggest moment.

It was written perfectly, straight out of a basketball movie. The setting was James’ beloved hometown of Cleveland, where he once did the impossible.

His nemesis then, Steph Curry, was now a teammate. Yet there was Curry, firing one 3 after another, determined to be the star in Cleveland—deafening boos notwithstanding.

James wouldn’t have it.

With Team Durant scheming a scary heist to get the W, James called for the ball at the right block. Everyone cleared out. Everyone knew. James backed up Zach LaVine, the unfortunate soul who will forever be immortalized in yet another LeBron James classic. Joel Embiid, being the good teammate that he is, joined in the fray and tried to help on defense. It didn’t matter.

James pulled up for a fadeaway, in an angle and in an arc that almost seemed impossible. The shot went in and Team LeBron got the win.

Game on the line. @KingJames finished it. pic.twitter.com/5GXwK7dHnx

If Team Durant had been successful in spoiling the LeBron-Steph lovefest, then Joel Embiid would’ve been named MVP. He went for it from the start and finished with 36 points on 14-of-20 shooting.

But how do you beat 16 3s from one guy? Steph Curry found his rhythm at the best possible time and didn’t let up. Curry ended with 50 points, just another 3-pointer shy of breaking Anthony Davis’ All-Star Game record of 52 points.

Curry’s 16 3s is a new record, but with the way Trae Young and LaMelo Ball shot the ball, no shooting record is safe.

“Part of me wouldn't be here without MJ's inspiration. I always wanted to be like him growing up. It’s crazy that the game-winning shot tonight was a fadeaway, and it was inspired by MJ.”

The All-Star Game, as always, run the whole gamut of game highlights, from insane dunks:

A reminder that Zach is a 2x dunk champ 🔥@ZachLaVine | #NBAAllStar pic.twitter.com/x1gigFq19W

What was unexpected (or not, if you really think about it) was Steph Curry hitting 16 3s in one game: