Philadelphia's franchise player could miss time in the team's playoff series against Miami. 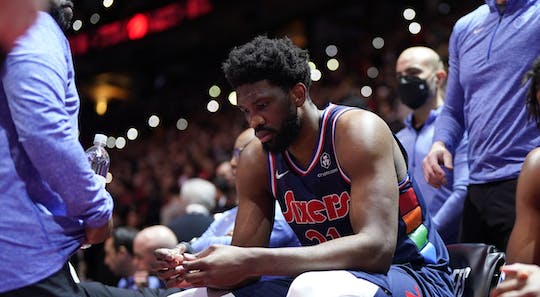 The 76ers announced the All-NBA big man had suffered a right orbital fracture and mild concussion during Thursday’s series-clinching Game 6 win at Toronto. Embiid was injured late in Philadelphia’s victory at Toronto on Thursday night, when the 76ers were closing out the Raptors and finishing off a six-game win in an Eastern Conference first-round series.

Per the team, Embiid will be listed as out for Game 1 of the 76ers’ Eastern Conference semifinal series against the Miami Heat is Monday (7:30 ET, TNT). Further updates, the 76ers said, would be provided.

Embiid averaged 26.2 points on 52% shooting to go along with 11.3 rebounds in Philadelphia’s first-round series against the Raptors. The Kia MVP finalist, already playing through a torn thumb ligament, is hoping to lead the 76ers to their first conference finals berth since 2001.