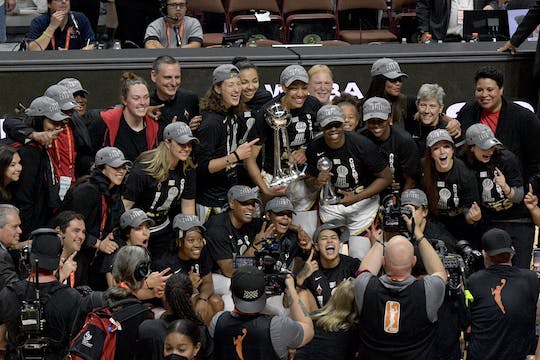 The Las Vegas Aces are the 2022 WNBA Champions after defeating the Connecticut Sun to claim the franchise’s first title. Chelsea Gray earned Finals MVP honors after delivering 20 points, five rebounds, and six assists in the clincher.

The Aces were up 67-61 with under four minutes remaining but the Sun responded with an 8-0 blast to claim the lead. Fortunately for Las Vegas, Riquna Williams stepped up big time as she knocked down clutch shot after clutch shot. She scored 11 points in the fourth, including eight straight, to give the momentum back towards her side. Kelsey Plum applied the finishing touches with a short jumper with 25.5 seconds lift, giving the Aces a 77-71 advantage.

Williams finished with 17 points, punctuated by five triples while Plum added 15 points and three assists. League MVP A’ja Wilson registered a double-double of 11 points and 14 rebounds as well as two steals and two blocks, after playing all 40 minutes of game time.

Winning coach Becky Hammon, who played for the franchise as a member of the San Antonio Stars, became the first coach in league history to win a championship in her debut season. The Aces are also the first professional sports team from Las Vegas to capture a title.

For the Sun, Alyssa Thomas became the first player in WNBA history to record back-to-back triple-doubles with 11 points, 10 rebounds, and 11 assists in a losing effort. Courtney Williams led Connecticut in the scoring department with 17.

For the first time in franchise history, the @LVAces are #WNBA Champs, defeating the Connecticut Sun 3-1 in the #WNBAFinals presented by @YouTubeTV to take the title ??#MoreThan pic.twitter.com/KjErTsQTIM

Chelsea Gray capped off her incredible playoff run with a Finals MVP trophy. In 10 playoff games, she averaged 21.7 points while shooting an astonishing 61.1 percent from the field, including 54.4 percent from deep. Her marksmanship was otherworldly and so was her playmaking as she put up 7.0 points while being one of the focal points of the Aces’ offense.

After a relatively quiet outing in a Game 3 loss, Gray came up with 20 big points to help her team get the championship.

There has been an outpour of messages online to congratulate the new WNBA champs.. From Ja Morant, Dawn Staley, Gregg Popovich, Tom Brady, Billie Jean King, and even Barack Obama, everyone gave a shoutout to the Aces.

But you have to hear from the Las Vegas franchise player herself right after winning it all:

The Aces have experienced heartbreak before, losing the 2020 WNBA title and falling short in last year’s playoffs. Finally reaching the mountaintop after almost getting there the previous times makes it all sweeter.