"I was just thinking about having fun," Giannis said after leading Team LeBron to a win and earning the Kobe Bryant All-Star Game MVP award. 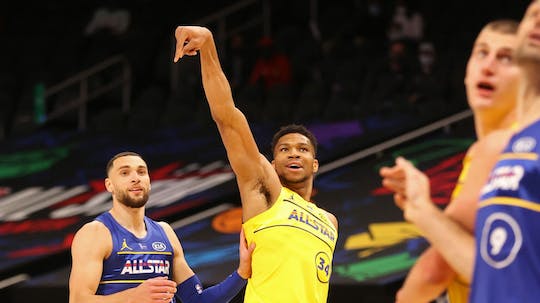 What is the secret to being one of the most dominant players in the NBA today? Is it having boulder-like shoulders or having a humongous wingspan? Is it collecting accolades or affirmation from your peers? What is the recipe for being a dynamic force that makes you a league MVP?

For Giannis Antetokounmpo, the secret lies elsewhere. And truth be told, it may be as simple as living in the moment and enjoying the game to the fullest.

This past All-Star weekend, the Milwaukee Bucks star had the time of his life. Antetokounmpo was joking around fellow stars and playing with immense joy that was contagious. But it wasn’t all fun and games for his squad, Team LeBron, which mightily defeated Team Durant, 170-150.

Giannis was the star amongst stars, taking home the NBA All-Star Game Kobe Bryant MVP award with a staggering line of 35 points on a perfect 16-for-16 shooting from the field. It was the best shooting performance in the history of the annual exhibition game, eclipsing the previous record held by Hal Greer who went 8-for-8 in 1968.

"Obviously, I'm extremely happy at just having the award with the name of Kobe Bryant in my house,” Giannis said in the postgame media availability. "It's a great feeling. I wanted to win the one last year really bad and I had a chance to win because I felt like I wanted to have the trophy in my house, but this year I wasn't even thinking about winning it.

“I was just thinking about having fun, and I had the opportunity to play well. My team played great and I was able to just win it and to have the trophy with the name of Kobe Bryant, it’s amazing, and I know he would be happy. Yeah, I know he'd be happy."

Just as Giannis said, he was simply having fun. Whether it was him showing off his dance moves or wanting some Luka Magic, he just wanted to have a good time with some of the best basketball players in the world.


Giannis admitted that he wanted to own some ASG hardware in previous editions but things didn’t pan out. When he didn’t really think about it and just went out there to have fun, he finally won. As a result, he joins Michael Jordan and Kevin Garnett as the only players ever to win a season MVP, a Defensive Player of the Year award, and the All-Star Game MVP.

"You know, like once you start having joy and you don't worry about the outcome of the game, everything takes care of itself. I believe fear and fun cannot go together. It's either one or the other. This year I've chosen for it to be fun,” Giannis said on his recent joyous approach to the game. "Every game I step on the floor, fun. Pregame, fun. With my teammates, fun. I want to have around my team, fun, energy.”

This isn’t to say that the Bucks’ franchise player doesn’t care about the wins and losses. Milwaukee is currently third in the Eastern Conference with a 22-14 record. And Antetokounmpo himself is having another stellar season with averages of 29.0 points, 11.7 rebounds, and 5.9 assists. Probably the striking difference for the reigning league MVP is his day-to-day mindset. It seems that he’s controlling only what he can while still maintaining his effort and commitment. All while enjoying everything and living in the moment.

"Not worrying about the outcome, not worrying about where we're trying to get. Worried about now, can we enjoy this one. As long as we come to the arena and we come to work and we're enjoying each other and what we do, it’s going to take care of itself. I really believe this. Not only do I say this. I apply it in my life, and it's been working,” Giannis continued.

Giannis also enjoyed his banter with the Denver Nuggets’ Nikola Jokic, who, incidentally is one of the top MVP candidates this year. They didn’t look like they were talking shop. Instead, they were just trying to show the basketball world what it would look like if you paired two comedic giants on the hardwood. Before Antetokounmpo went to center court to receive his award, Jokic was already hilariously hoisting up the trophy in the background.

"I was like Niko, we've got to have our own TV show. Niko and Giannis or Giannis and Niko, whatever. That guy, he's fun. I enjoy being around him,” Giannis said.

"I NEED somebody to believe in me!!"

Mic'd up Giannis at #NBAAllStar is pure comedy: pic.twitter.com/4GB6yI9cjG


"But it goes by fast. It's my fifth All-Star Game, and I can’t wait to go out there and get to like my 10th. Like you see LeBron has 17 of them. It's insane. As I said, try to enjoy every All-Star Game as much as possible. You can never take these games for granted. You're among the best 24 players in the world. It's just fun to be around them, and it's fun to learn from them."

So what’s the secret to being one of the best basketball players in the world? Take it from Giannis Antetokounmpo. Sometimes, you just gotta have fun.