The Warriors and their former Finals MVP winner plan to reunite on a one-year deal, per reports. 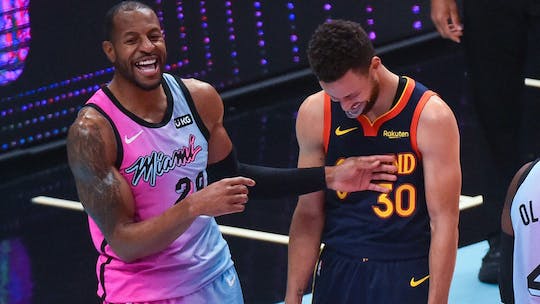 One of the most beloved players in recent Golden State Warriors history will be taking a second stint with the team. Jonathan Abrams of The New York Times reports Andre Iguodala plans to sign a one-year deal with the Warriors, a move that was also reported by Shams Charania of The Athletic.

Per Charania, the Brooklyn Nets were also a finalist for Iguodala.

“Who would have thought I’d have the opportunity to go back to the place where I was able to have, whatever you want to call it, legacy years, in terms of the accomplishments, winning multiple championships, the relationships that I was able to build with some of my closest friends and teammates?” Iguodala told The New York Times.

Last season, Iguodala averaged 4.4 points, 3.5 rebounds and 2.3 assists per game in a reserve role for the Heat, and all of those stats were at or near career-lows.

Iguodala played for the Warriors from 2013-19 as Golden State rose from playoff team to title contender to championship-winners in that window. He was the 2015 Finals MVP and was traded by Golden State after the 2019 Finals to the Memphis Grizzlies. He never played there and eventually wound up on the Miami Heat, where he spent the past two seasons.

In 2019-20, he helped the Heat to The Finals, which marked Iguodala’s sixth consecutive trip to the championship round. However, Miami lost in six games to the Los Angeles Lakers. This season, the Heat struggled with injuries and inconsistency and fell in the first round to the eventual-champion Milwaukee Bucks.

Golden State did not make the playoffs in 2020-21, but did qualify for the Play-In Tournament (where it lost to the Lakers and Grizzlies). The Warriors are still powered by former Kia MVP Stephen Curry and former Kia Defensive Player of the Year Draymond Green. In addition, Klay Thompson — the Warriors’ former All-Star shooting guard — is expected to be ready to play after suffering through two seasons worth of injuries.

Curry reportedly agreed to a four-year, $215 million extension with the Warriors earlier this offseason, but that deal has yet to be officially signed. He averaged 32.0 points, 5.8 assists and 5.5 rebounds and shot 42.1% from 3-point range in 2020-21.

In all, the Warriors are a decidedly younger crew from when Iguodala was last around. Second-year center James Wiseman and this year’s Draft pick, Jonathan Kuminga (No. 7 overall) represent the team’s future, and young holdovers like Juan Toscano-Anderson, Andrew Wiggins and others are also in the mix.

Iguodala told The New York Times that taking on a mentoring role is one of the things that intrigued him about returning to Golden State.