First-time All-Star Andrew Wiggins sees the beauty in his debut taking place in Cleveland after a long journey and years of hard work. 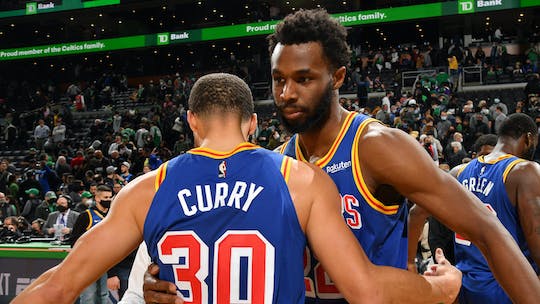 SAN FRANCISCO — Andrew Wiggins stayed sound asleep, hoping that his pre-game nap would help lead to another dominant performance. Instead, Wiggins’ girlfriend and daughter opened his bedroom door to alert him about his standing in this season’s NBA All-Star Game.

Wiggins made his first career NBA All-Star appearance as a starter as determined by the fan (50%), players (25%) and media members (25%). The latest honor captured how Wiggins has found the perfect home with the Golden State Warriors for the past 2 1/2 seasons after spending his first six NBA seasons with the Minnesota Timberwolves in only one playoff appearance. And now, Wiggins will play in his first All-Star game on Feb. 20 in Cleveland nearly eight years after the Cavaliers dealt him as their No. 1 pick to Minnesota for Kevin Love.

“Full circle,” Wiggins said. “It feels good. No better way to have my first All-Star where it all started.”

And no better way for Wiggins to hear about his first All-Star starting nod the afternoon before facing his former team. Shortly after Wiggins’ girlfriend and daughter woke him up with the news, Wiggins’ cell phone then blew up. Text messages flooded in the Warriors’ group chat.

Then, the Warriors congratulated Wiggins for what Stephen Curry called “an amazing accomplishment” and “well deserved.” So much that Draymond Green and other teammates did not pay much attention that Curry also received a starting nod in what marked his eighth All-Star appearance.

The slights continued. The Warriors’ coaching staff compiled footage for their pre-game film session that included a Wiggins highlight reel followed by a short Curry montage.

“We would not be where we’re at without his play,” Thompson said. “It’s really cool. He deserves it. I wholeheartedly believe that.”

Some other All-Star candidates might disagree, including Green. But that’s besides the point. Wiggins has proven his keep after dealing with skepticism for most of his NBA career on if he would live up to his potential.

First, the Cavaliers dealt Wiggins to Love out of belief he would help LeBron James and Kyrie Irving win an NBA championship much faster. While the Cavaliers won one title NBA title out of four Finals appearances against the Warriors, Wiggins experienced only one playoff appearance with Minnesota (in 2018). What started as intrigue with a young roster turned into frustration with a fiery veteran (Jimmy Butler) and the Timberwolves’ other No. 1 pick (Karl-Anthony Towns).

Still, the Warriors pursued Wiggins leading into the trade deadline during the 2019-20 season. The Warriors were heading toward the NBA lottery, while absorbing key departures via free agency (Kevin Durant), trade (Andre Iguodala) and retirement (Shaun Livingston) as well as injuries (Curry, Thompson). The Warriors anticipated that Curry and Thompson would eventually become healthy. But they still needed wing depth amid their other absences.

So, the Warriors acquired Wiggins from Minnesota for D’Angelo Russell, Jacob Evans III and Omari Spellman. The Warriors also received a first and second-round pick.

“I was ready for a new chapter,” Wiggins said. “I feel like we both reached our limits. I feel like the trade worked out for both parties and both teams.”

It appears the trade worked out far better for the Warriors (36-13) than Minnesota (24-24). Though the Timberwolves have an intriguing young roster, they have become hobbled with injuries. The Warriors have returned to championship contention. The Warriors argue part of that has to do with Wiggins while using that first-round pick on a player they believe will also become an All-Star (Jonathan Kuminga).

“It seemed like a really good fit. It’s proven to be that,” Warriors coach Steve Kerr said of Wiggins. “But I think most of that has been Wiggs just comes in and works every single day. He’s earned not only the All-Star spot, but the position he mans on our team. He’s our number-one perimeter defender night in and night out, and a key cog in our offense.”

Because Wiggins has fulfilled that job description consistently, Kerr considered his All-Star starter inclusion to be “one of the proudest moments I’ve had as a coach.” Strong words since Kerr coached the Warriors to three NBA titles in five Finals appearances. Wiggins admitted that comment “means a lot.”

“I feel like it’s a good fit,” Wiggins said. “The style of play complements my game. We’re like a family here. Everyone looks out for each other. We all want everybody’s best interest. We all want everybody to have success and do well. The energy is so positive. It’s a vibe that everyone wants to be a part of. It’s special.”

Because of the Warriors’ talent and culture, they have brought out of the best out of Wiggins after Minnesota could not.

“He doesn’t have to put the whole team on his shoulders every night like he might’ve in the past,” Thompson said. “He is such a great two-way player that if his shot is not there one night, his defense will always be there. He’s also one of the best athletes in the NBA. Combine all of those traits, and you got an All-Star.”

There are other reasons Wiggins has become an All-Star starter.

“It’s hard not to like to play with Steph and Klay with all the open shots you get, the space you get and playing with them. Steph is a legend and is one of the GOATS,” Wiggins said.

Same thing with Wiggins, particularly against his former team. He entered Thursday’s game averaging 23.8 points while shooting 60% from the field and 41.7% from deep in two other matchups. Earlier this season, Wiggins also threw down a poster dunk over Towns.

Towns insisted no hard feelings over that incident. He contended he told Wiggins afterwards, “I can’t wait to see you be an All-Star.” On Wednesday night, Towns received his wish and called the selection “beautiful.”

“My vote was for him,” Towns said of Wiggins. “I just want to see my teammates be great. I think that if I’ve shown anything in my career, I put my pride to the side for the betterment of others. I love that of my teammates, regardless if they’re former or current that are doing well. It’s a bond you build. We went to wars together when we were out there. When you prepare for these games, there’s lots of blood, sweat and tears that we put into this game for each other. I just want to see him see the fruits of his labor.”

So after the Warriors clinched their fourth consecutive win, Towns and other Timberwolves players hugged Wiggins and congratulated him on the honor.

Meanwhile, the Warriors are sure this won’t be the last time Wiggins wakes up from a pre-game nap from his family and an active group text about the NBA All-Star Game.

“He will be an All-Star multiple times,” Thompson said. “This is just the beginning.”