Our All-Star Analysts discuss the correlation between the NBA’s new ball and shooting percentages, their favorite City Edition jerseys, Lakers without LeBron, and more, in this edition of At the Buzzer. 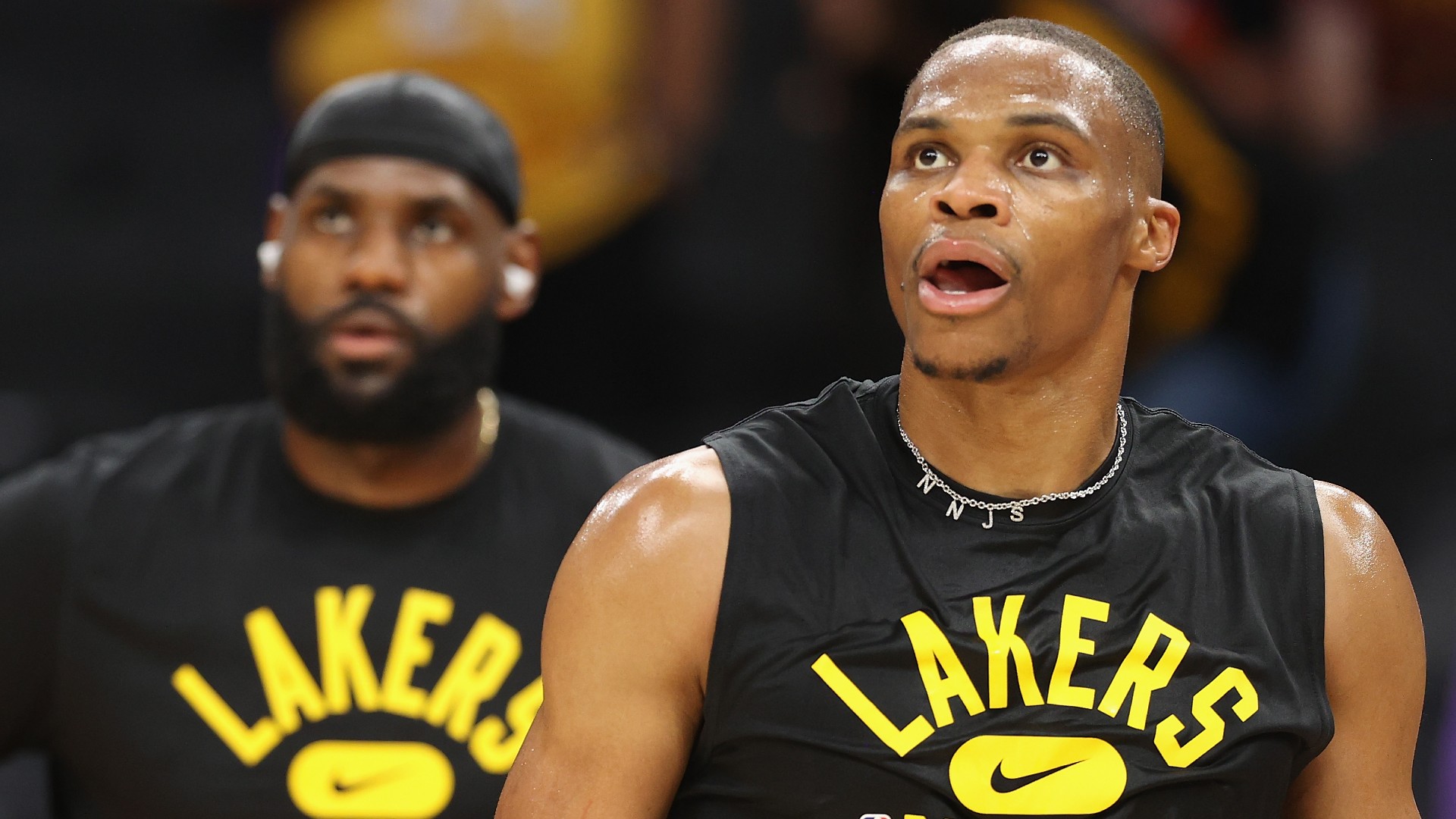 Are you buying that players are shooting worse because of the new basketball?

Bea Daez-Fabros: Ball don’t lie! With how skilled these NBA players are, it would just take a few shots up to get used to. Don’t blame it on the ball.

Chris Newsome: I don’t think that is the case necessarily. I do understand how the calls can affect your game but great players will always be able to adjust. It just takes time. I mean, they did adjust to a new ball in the Olympics and still got a gold medal. I do feel, however, that the game allowing more contact and less foul-fishing calls also plays a part in the lower percentages this year.

Coach Sandy Arespacochaga: I’m buying it! The shooting percentage across the NBA has been at its lowest in 15 years. NBA players have been using the old ball since they entered the NBA. Imagine the amount of reps these players have taken with those old balls and now they have to adjust to a different feel on this new ball. But I believe this is just temporary. The players will get a lot of reps with the new balls and get used to it soon. If you’re a shooter, you’re a shooter. Me? I’d rather drive and pass.

What are your favorite and least favorite 75th Anniversary City Edition jerseys?

Bea: Least favorite would be the Boston Celtics. It’s not eye-catching enough to be a City Edition jersey. I know they were going for the traditional look, but they could’ve added more detail than just the outlined Celtics and stripes.

I have so many favorites but No. 1 would be the LA Clippers’ jerseys. I love how they went with a completely different City Edition look this year. It’s hard to think that a cute baby blue color would look good on a jersey, but they managed to still make it look sleek and clean.

Chris: Favorites might have to be the Charlotte Hornets at No. 1, then the Brooklyn Nets and the Houston Rockets. Least favorites are the Orlando Magic, Cleveland Cavaliers, and Dallas Mavericks.

Coach Sandy: My favorite is the Charlotte Hornets City Edition. I love the color and the mix of the old and the new. The color, the pinstripes, the pipings, and the old school Hornets logo on the shorts brings me back to the Alonzo Mourning and Grandmama days. I also like how the teal color mixes in with a darker shade of blue and how it blends into honeycombs. What detail!

My least favorite is the Oklahoma City Thunder jersey. Some of my friends in the Hotrod NBA fantasy league like it, but I don’t. I think it’s too plain and too white. As my mom would say, “Dumihin!” It’s like someone made a mistake in designing the jerseys, applied liquid paper on it to correct it, but then it got submitted as is.

Are the Philadelphia 76ers better without Ben Simmons?

Bea: So far, yes! Early in the season, they’re already one of the best performing teams at 8-3. Without Simmons, the other guards have definitely stepped up. Seth Curry’s numbers are up; young gunner Tyrese Maxey is averaging double-digits, as well as Furkan Korkmaz and Georges Niang. They’re even the No. 1 team in 3-point field goal percentage now.

Chris: I believe Ben Simmons is an unbelievable talent. And just like many young stars today, he is adjusting to the spotlight and everything that comes with it. At this point, I do feel they would still be this good with him there, and in my opinion, even better. However, when deep damage has been done, sometimes it can be hard to repair. Everybody knows that this situation will take TIME. As for the 76ers’ organization, they seem to all be on board and on the same page despite everything going on, which shows the level of professionalism they have in that organization. There’s no doubt in my mind that with or without Ben Simmons, they will be a playoff contender.

Coach Sandy: The Sixers have been on a tear recently despite the absence of not just Simmons but also starters Tobias Harris and Danny Green and defensive specialist Matisse Thybulle. This has been because of players stepping up and doing their roles well. Outside shooters Seth Curry, Furkan Korkmaz, and Georges Niang have been shooting well, enabling the creating and scoring of guards Tyrese Maxey and Shake Milton. And don’t forget the man in the middle, Joel Embiid. Are they better without Ben Simmons? If it’s a disgruntled Ben Simmons, then yes! But if Simmons gets on board and happily does his role, then his ability to create, drive, rebound, and defend can help them get to the top.

So... what was James Harden thinking in this play?

James Harden ran out of gas on this play 🥵😂 #Shaqtin pic.twitter.com/T00RbpakMw

Bea: One big facepalm! Definitely not a brain lapse, but rather, poor attitude. Always go back on defense, no matter what. He could have at least touched the ball so that even if it was an automatic turnover, they can set up their defense again instead of giving up an easy layup.

Chris: I would like to think that he didn’t think Saddiq Bey would be right behind him because if Harden got the ball it would be a backcourt violation. But even still, you either have to just take the violation at that point or make sure nobody will get the ball until it rolls out of bounds. As many good coaches would say, never give up on a play.

Coach Sandy: James Harden is a smart man. He knew that if he picked the ball up past half court,  it would be a backing violation. Just as he was approaching the half court line, he probably thought, “How come the Philippines is still requiring face shields compared to the rest of the world? Either the Philippines is the smartest or there is something fishy behind it.” Or probably not. Either way, Saddiq Bey benefited from this blunder.

Bea: The Lakers is a veteran-laden team of All-Stars and even without LeBron, they have enough pieces to win games. Russell Westbrook had some crucial turnovers in the past games and needs to step up on being the floor general of the team. Chemistry should improve as they play more games. Anthony Davis and Carmelo Anthony add to the offense and they have reliable rim protectors in DeAndre Jordan and Dwight Howard.

Chris: I think them believing they can shoot the ball is actually their biggest opponent. I see Westbrook turn down good looks for worse looks. He definitely has the ability to shoot, just lacks the confidence, and every team knows it. It’s all going to come down to taking care of the ball enough to get good clean looks at the basket. Next is also being able to defend. The Lakers at the moment are the type of team that lets their offense dictate how they will defend. When offense isn’t flowing, their defense is definitely nowhere to be found. LeBron James is a huge piece, but they have to fix their chemistry first above all.

Coach Sandy: YES! Chemistry is key for the Lakers. Why is chemistry important? (Aside from it being a science subject, of course.) The Lakers have to know how to play with one another on both ends of the court. They only have five players on the team from their 2020 championship run. The rest are new. Not only that, Talen Horton-Tucker, Trevor Ariza, Kendrick Nunn, and Wayne Ellington are all injured and have been missing games. Now, the Lakers’ King is injured as well. This is important, particularly for Russell Westbrook, to learn how to co-exist with fellow ball-dominant LeBron. It’s been an up-and-down start for the Lakers, and the sooner LeBron and the rest of the injured crew can get back to playing, the better for LA.

Behind Lauri Markkanen and Jordan Clarkson, the Jazz managed to hold off the Magic.