Devin Booker became the youngest player to score 60 points or more in a game when he dropped 70 on the Boston Celtics on March 24, 2017. 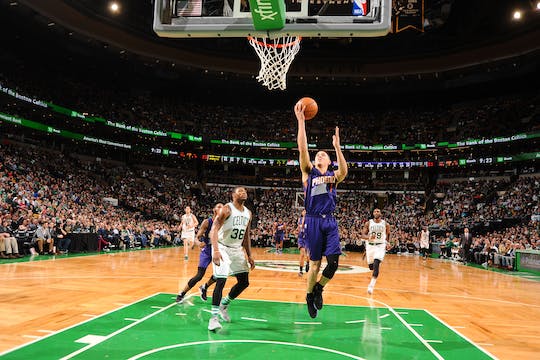 Devin Booker of the Phoenix Suns, when he was 20 years old, scored 70 points in an NBA game.

That’s still unbelievably amazing to read, right? It’s as if that happened in a video game, where scoring 70 points is plausible but—even in a fictional universe—not easy, and not a real life event that happened in an actual NBA game.

Booker achieved the historic feat (the youngest player to ever score 60 points or more in a game) on March 24, 2017, but that’s not important. He did it in a loss to the Boston Celtics (most points scored by an opponent against Boston), but that’s not important either. What’s important is that Devin Booker of the Phoenix Suns, when he was 20 years old, scored 70 points in an NBA game. And how.

In 2017, Booker was only in his second year as a pro, starting for a Suns team that wasn’t very competitive. Way before the 70-point game rolled around, the Suns had been out of playoff contention and were only playing for best “finish strong” effort. They had just lost six straight games and were heading towards the end of the season with absolutely nothing to smile about. Then came the Boston game.

Nothing special about it really, no rivalries or extra petty motivation or anything of that nature, except that the Suns were tired, had nothing to lose, and already had one foot out the season.

The Celtics were the stronger team and wanted to get the job done early. They stormed out of the gate to a 22-3 lead, before Booker got his first field goal: a driving right hook off the glass over Jaylen Brown at the 4:40 mark in the first quarter.

If you were looking for any foreshadowing of a historic night from Booker, there was none. He missed his first three attempts and showed no signs of irregularity. When the first half ended, Booker had an uneventful 19 points. With the Suns down 23 points, he was on track to get at least 35, maybe 45 max.

But in the third quarter, Booker got back out on the floor and chose to be legendary—something his coach Earl Watson reminded him during pregame to be and something the late Kobe Bryant signed on his shoes a year and a day prior.

On his quest to become legendary, Booker attacked every chance he got and threw all sorts of shots at the Celtics’ defense. Here’s a few of them:

That last one came at exactly the two-minute mark in the fourth quarter, to put him up to 59 points.

The 70th point came off of a free throw, and by then all of Booker’s teammates were on their feet, Boston fans were cheering, and history was made. He dropped 51 points in the second half and as a result became one of only five players in NBA history who had scored a total of 70 points or more in a game. The only players to do it were Wilt Chamberlain (six times), Elgin Baylor, David Thompson, David Robinson, and Kobe Bryant. Booker is the youngest in that group.

That Booker did it at a young age was impressive, but what’s truly remarkable was how he did it at such a controlled pace. He navigated the floor so smoothly and picked the Celtics defense apart so fluidly, it didn’t look much a destruction but more an infusion.

As Booker slithered his way on offense, drew fouls at will (he went to the line 26 times), and methodically picked his spots, he didn’t only alter the course of NBA history but also his own.
It became one of those rare sports moments where fans were allowed to be in awe of someone pushing himself to do great things, things that are beyond what is expected of them.

Every time Booker had the ball in that glorious second half, it no longer mattered who was in front of him because it became Booker versus himself. That’s how legends are made.