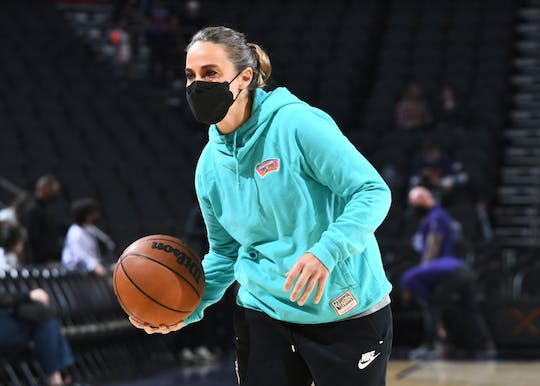 Becky Hammon is coming back to the WNBA as a head coach.

“I am so excited to return to the WNBA and grateful for Mark Davis and Nikki Fargas having a vision for me to lead the Aces,” said Hammon. “This is where I come from, and I wouldn’t be me without the W. I’m thrilled to be able to give back and lead this next group of women.”

She will be the highest paid coach in the league, potentially earning three or four times more than the highest paid player according to a person familiar with the deal. The person spoke on condition of anonymity because terms of her contract haven’t been released.

“We’re very excited to have Becky return to the Aces’ franchise as our head coach,” said Las Vegas Aces President Nikki Fargas. “Her success in the sport of basketball as both a player and a coach is unparalleled, and fueled by a tenacious desire to be the best she can possibly be. We have one of the most talented rosters in the WNBA, and Becky is the absolute best person to lead this team.”

Hammon has been an assistant for the Spurs for eight seasons. She has interviewed for several NBA head coach openings in the past, but hasn’t gotten an offer to be the first woman to lead a team.

She told the AP in an interview in August that: “There’s 30 jobs and they are incredibly hard to get. When I say there are 30 jobs, not all 30 are available, so I’m really talking about three or four.”

Hammon has continued to accumulate coaching ‘firsts’ in the NBA. On July 3, 2015, she became the first woman to serve as head coach in the NBA’s Summer League where she led the Spurs to the league title.

“Becky has become an integral part of our program in every way, shape and form,” said Spurs coach Gregg Popovich. “This is a great opportunity for her to highlight her many skills. Her intuitive feel for the game and ability to teach will serve the Aces very well as she institutes her system and culture.”

Bill Laimbeer, the Aces’ current coach, has been with the organization since it first moved to Las Vegas in 2017. He had taken a step back last season, letting assistant Tanisha Wright run more practices and in-game huddles. Wright left in the offseason to be the head coach of the Atlanta Dream.