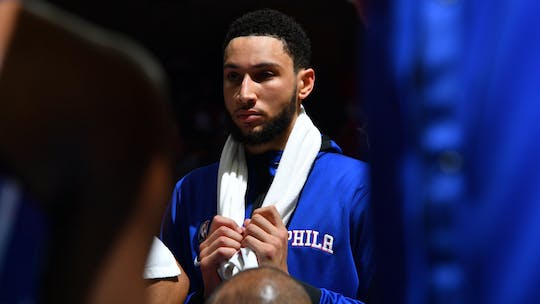 Star point guard Ben Simmons has been suspended one game for conduct detrimental to the team, the Philadelphia 76ers announced Tuesday. As a result, Simmons will not play in the 76ers’ season-opening game on Wednesday in New Orleans.

The Sixers’ release reads as follows: “Ben Simmons has been suspended for one game due to conduct detrimental to the team. As a result, Simmons will miss the 76ers’ season opener at New Orleans tomorrow night.”

Per multiple reports, Simmons was thrown out of practice today by coach Doc Rivers for not being engaged in practice. ESPN’s Adrian Wojnarowski reports the lack of participation and engagement by Simmons at practice has been a theme since his return. Simmons reportedly refused to participate in one stage of the practice session before being tossed, specifically not taking part in a defensive drill.

Additionally, Wojnarowski reports the Sixers have fined Simmons $1.4 million for his absence from four preseason games. The Sixers have also hit Simmons with numerous team fines for missed practices, on-court workouts and meetings. He has not earned any money since returning to the team on Oct. 11.

“I just thought he was a distraction today,” Rivers said Tuesday after practice. “I didn’t think he wanted to do what everybody else was doing. It was early. It wasn’t a big deal. I just told him he should leave. We went on with practice.”

Sixers All-Star center Joel Embiid said Tuesday he wasn’t here to “babysit” Simmons. “At this point, I don’t care about that man,” Embiid said. “He does whatever he wants.”

Simmons has declined to talk to the media since his return.

"At this point I don't care about that man." 🤯🤯🤯 pic.twitter.com/telIeAGsyi

Per Dan Gelston of The Associated Press, Simmons lingered outside the huddle, dribbled a basketball and looked uninterested during a team huddle at Monday’s practice, where he did not practice with the first team.

He has practiced twice with the Sixers since ending his holdout. Meanwhile, the Sixers hold out hope the three-time All-Star guard wants to suit up again. The 25-year-old from Australia had four years and $147 million left on his max contract when he decided he wanted a trade.

Wojnarowski reports the Sixers’ brass remains steadfast in their strategy regarding a Simmons trade — they will only trade him for players who help Philadelphia remain a championship contender.

Simmons has dominated the headlines in Philadelphia since his baffling offseason trade request and then mystifying decision to report, showing up without warning last week.

Tyrese Maxey ran the offense with the first team in the portion of practice open to the media, and Simmons mostly stood in a corner stretching or dribbling the basketball. He played defense on one drill, then walked off the court without saying a word to a teammate.

Simmons, the No. 1 pick of the 2016 draft, was paired with Embiid as the franchise cornerstones as the Sixers chase their first NBA championship since 1983.

Simmons, though, took the brunt of the blame for the top-seeded Sixers’ second-round exit in last season’s playoffs. He shot 34% from the free-throw line in the postseason and was reluctant to attempt a shot from anywhere on the floor late in games. That led to him spending critical minutes on the bench.

He’d be the only missing starter from last season’s run to the Eastern Conference’s top seed. Embiid, Danny Green, Seth Curry and Tobias Harris form a solid first four. Sixers President Daryl Morey has fielded offers for Simmons, but has yet to find a package to his satisfaction for the enigmatic guard.

Additonally, the Sixers edited Simmons out of the in-game highlight films shown during preseason games. Depending on the what happens the next couple of days they may need to call the editor back for some last-minute splicing before Friday’s home opener against Brooklyn.