From twins Brook and Robin Lopez giving us a glimpse of their relationship to Jeremy Lin talking about anti-Asian violence, we give you a list of NBA podcast episodes that you should check out. 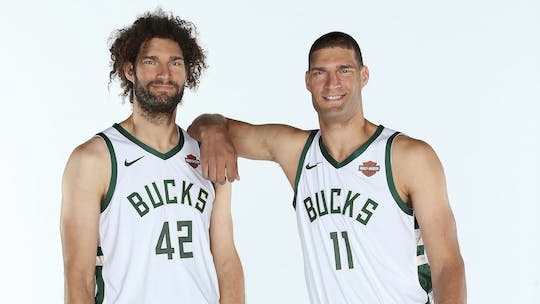 Podcasts have become a great way to create and consume content. When it comes to NBA and basketball, you can get your fix with a number of available pods out there. Below are just some of our favorite podcasts covering the game that we love. You can check the episodes that we linked, carefully picked to get you hooked. Take a listen and enjoy!

JJ Redick has put an incredible amount of time and dedication into the world of podcasting even while still playing in the NBA. The key to Redick’s success in this space is his relatability with his guests. As an active basketball player himself, he knows how to ask the right questions that would be appealing to the listeners.

Alongside co-host Tommy Alter, Redick dives deep into players’ lives, getting to know their quirks and backstories, and discussing a lot of behind-the-scenes in the NBA. Conversations can range from high-level basketball topics such as Chris Paul talking about pick-and-roll coverage to fitness and wellness such as their their recurring segment “Eat, Pray, Dunk”.

The Old Man and the Three’s recent episode with twins Brook and Robin Lopez is a fun episode to dip your toes into. Did Robin feel a little bit jealous when Brook won the 2021 championship with the Milwaukee Bucks, just a year after Robin left the team? How did they feel about being on the same court for the first time? Did you ever wonder why Robin hates team mascots so much? The interview has a lot of hilarious moments and banters between brothers.

At the end of every show, Redick and Alter do a fantasy draft of the most random categories. In the linked episode, they had ESPN NFL analyst and Brooklyn Nets diehard Mina Kimes and New York Times best-selling author Shea Serrano participate in a draft of fictional high schools. If you know these personalities from NBA Twitter, you’ll know that their guesting was anything but boring.

All the Smoke
Episode: Allen Iverson

As the trend of players creating their own shows continues to grow, it would be remiss not to mention All the Smoke. Former NBA standouts Matt Barnes and Stephen Jackson are not your typical, top-of-mind hosts, especially with how they were portrayed during their playing days, but that’s part of the hook.

Barnes and Jackson don’t lean into perceived narratives and instead use their openness and brashness to make guests more comfortable with sharing stories. The interviews are not as plain and simple as black coffee, but more like a caramel macchiato with extra cream and an extra shot of espresso.

All the Smoke features past and present NBA stars, media personalities, music artists, actors, and more. Whether it’s Carmelo Anthony opening up about not really wanting to leave Denver earlier in his career or learning more about the affable Inside the NBA host Ernie Johnson, this podcast lets you hear what you want to hear.

Take a listen to Episode 46 with Allen Iverson. AI is obviously a legend in the game but he rarely gives candid interviews. It seemed like he always had his guard up. So it was nice to see Iverson opening up about what he went through in his career in his own words, unfiltered and unbiased. The guy was always about pushing the game forward and being true to himself, and he was able to articulate that in this episode.

Against The Rules
Episode: Ref, You Suck!

From our po and opo tradition to our first GMRC class in kindergarten, we were taught to be courteous and empathetic members of society from a very young age. But why is it socially acceptable for athletes to be rude or downright disrespectful to referees?

Against the Rules with Michael Lewis strives to answer this question. It starts with diving deep into the relationship between NBA players and coaches and referees. It has interviews with Warriors head coach Steve Kerr and current NBA senior vice president for referee operations Joe Borgia, but really, this first episode only sets the stage for a broader point.

The succeeding episodes tackle our deteriorating relationship with the referees in our daily lives – those in charge of ensuring that we follow rules. There are plenty of podcasts about basketball. Given how prevalent the sport has become in the podcasting space, basketball has become a nice gateway to getting into podcasts about other topics.

The Mismatch
Episode: An NBA Offseason Game Called “Do you Believe?”

The quintessential basketball podcast is just two people talking hoops. There are literally hundreds of those podcasts out there, but no duo has the same chemistry as The Ringer’s Kevin O’Connor and Memphis radio personality Chris Vernon.

Duo podcasts become stale and unappealing when the hosts discuss similar takes. That's not the case with KOC and Verno. KOC is your buddy who knows how to navigate basketball reference pages like a hacker and can also explain what RAPTOR, an advanced basketball metric, means. Verno is closer to your uncle who watches a lot of games and takes what he sees with his own eyes as fact.

This dynamic of nerdy, new-school basketball "take-ology" with old-school eye test/gut feel punditry makes every episode an interesting listen. You can tell a lot about yourself as a fan by whom you sympathize with between the two.

In the linked episode, the two take on some of the recent developments in the league, including the future of Kevin Love and Ben Simmons. One of the best inside jokes of this podcast is KOC’s push for Simmons to shoot with his right hand instead of his left – a truly off-the-top-rope take that KOC has greatly invested time into proving.

If there’s one weekly podcast that will keep you updated, educated, and entertained, it's The Mismatch.

The great thing about No Dunks is that it doubles up as a sitcom.

The characters make the show: Tas Melas, J.E. Skeets, Leigh Ellis, and Trey Kerby have enough jokes to go around to entertain you for an hour-plus. If you’ve been a fan of the group since The Basketball Jones, then No Dunks is a no-brainer. It has all the things we love about The Starters but in podcast form.

The No Dunks crew offer a fun and unique look into NBA news and culture. They’re no longer just fans showing love for the game from their basement. Tas, Skeets, Leigh, and Trey are seasoned vets and longtime champs with interesting opinions.

"Beach Steppin’" episodes, where they respond to fan questions, are proof of that. There’s so much familiarity and history that make each listen undeniably homey. No dunks, maybe, but all gems.

The best podcast experience is when you come in thinking you’re smart about a certain topic, then coming out – at a bare minimum – 50 percent smarter.

That’s the Takeline experience. You’re a little informed before you press play, but by the time an episode has ended, you’re swiftly educated by Jason Concepcion, content creator from Crooked Media, and Renee Montgomery, former WNBA star and current part-owner of the Atlanta Dream.

This might be true in all podcasts, but it’s the manner in which Jason and Renee do it that makes Takeline stand out. Their sincere curiosity and utmost care for the wide-ranging topics they cover make for a great, intelligent listen. They jump from one topic to another seamlessly, nothing about the back-and-forth feels contrived nor forced.

Fans of Jason’s dry humor and lightning-quick wit will have to go to All Caps NBA for that. Here, he’s the insightful, sensible, and sensitive Jason (without sacrificing the fun) dictating the tempo. Renee provides the sharp perspective that comes from a socially aware former athlete, delivered smoothly as an open jumper.

This isn’t a podcast for hot takes. Just go over the list of the first two episodes: Jeremy Lin on anti-Asian violence followed by gender inequality in sports. That’s Takeline: heavy discussions minus the weight of condescension.