Big Question: Who has been the third most important Laker?

Two players have been integral for the Lakers this season, but they need to elevate their game and carry the load in the absence of LeBron James and Anthony Davis. The Los Angeles Lakers forged into combat for the first time this season without two of their biggest guns in LeBron James and Anthony Davis on Monday. The defending champions fought gallantly but eventually fell 111-94 to the Phoenix Suns.

James will be sidelined indefinitely due to a high right ankle sprain while Davis is still out nursing a right calf injury. The Lakers are still third in the West with a 28-15 record but will be in a dogfight every game without their stars. It doesn’t help also that starter Marc Gasol, who was inactive in five of the last six games due to health and safety protocols, will likely be out for a couple more games to regain his conditioning. Even the team’s ultimate glue guy Jared Dudley is out because of a torn right MCL.

With the Lakers hit with a hurricane of injuries, who will step up? Who will carry the team during this tumultuous time and help weather the storm until James and Davis return? Two players have been integral for the Lakers all season long, but they will be heavily relied on now to carry the load.

Down 86-78 midway through the fourth quarter against the Indiana Pacers on March 13, the Los Angeles Lakers were grasping for offense. Kyle Kuzma, who had been providing his usual scoring output up to that point, careened into Indiana's All-Star and brick wall Domantas Sabonis and earned a trip to the line. A couple of possessions after, visibly friskier, Kuzma shook off Justin Holiday for a fadeaway jumper in the lane. It didn't take much for Kuzma to catch fire. He later on drained back-to-back 3s and finished a possession that put the game out of reach.

This was what most had come to expect out of Kyle Kuzma in his first three seasons in the league: a streaky scorer who gets both criticized and praised disproportionately for being a young Laker with a lit Instagram account. He was always a lingering offensive threat that would either make or miss all of his first five shots.

But in his fourth year, Kuzma has matured into a pivotal role player for Los Angeles. When Frank Vogel is missing a starter, Kuzma gets the call and performs admirably. It hasn't even mattered what position he's filling in. Kuzma has started in place of guards like Dennis Schröeder and Kentavious Caldwell-Pope and is currently absorbing the minutes of the injured Davis. Much of this has to do with Kuzma's newfound consistency on both ends of the floor. Offensively, Kuzma has refined his shot selection, upping his 3-point attempts per game from 4.5 to 5.1 while also increasing his 3-point efficiency from 31.6 percent to a career-best 37.5 percent.

Defensively, Kuzma has adapted admirably to the Lakers' disciplined scheme, switching, closing out and darting around screens with much more determination compared to last year. Defense had held Kuzma back. Now, he's finally making an impact with his size and quickness unlocking other lineup options for Frank Vogel. In past years, lineups that featured Kuzma always had a negative net rating per 100 possessions, until this year when it's just about even.

Since Davis' injury in early February, Kuzma has shined and kept the Lakers afloat in a packed Western Conference. In 29 minutes per game, Kuzma has been dropping 14.4 points, 7.7 rebounds and 1.5 assists per game. His improved defense has also allowed him to stay on the floor, despite the occasional cold shooting night.

When the Lakers shipped a treasure trove of draft assets and young players to New Orleans for Davis, they bet on Kuzma turning into the player that would most help them win a championship over a potential draft pick or someone like Josh Hart or Lonzo Ball. Two years later, Kuzma is more than helping the Lakers through a patch of injuries and the added hassle of a condensed season. His minutes dwindled as the Lakers got deeper into the playoffs last year. Look for Kuzma to get Playoff Kuz trending this season. — Miguel Flores 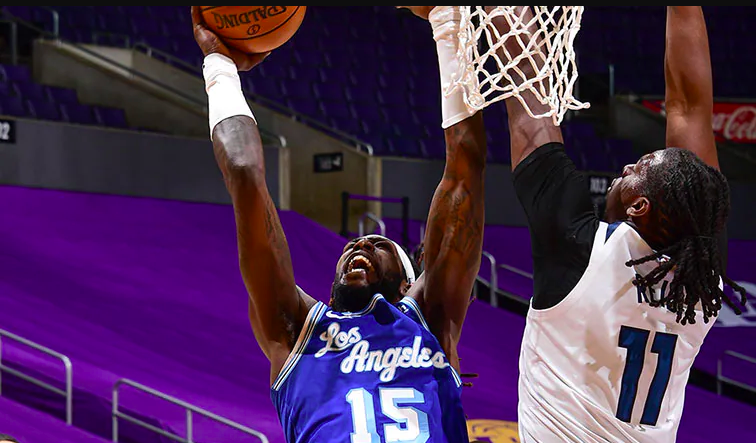 Not a lot of big men in today’s NBA thrive without a reliable and consistent perimeter game. As modern basketball continues to expand, having the ability to space the floor is common. The likes of Kristaps Porzingis, Nikola Jokic, Joel Embiid, heck, even Boban Marjanovic, all have a 3-point repertoire.

But if you’re Montrezl Harrell, you’re the exception to the rule.

As a 6-foot-7, 240-pound power forward/center who has made a living inside the paint, Harrell is a bonafide rarity. He is an uncommon gem that the 2020 world champions pursued in the offseason.

Aside from having two future Hall of Famers in James and Davis, the Lakers won last season’s title with size and height. They had the 7-footer of JaVale McGee and Dwight Howard but they also rotated on 6-foot-10 Kuzma, 6-foot-5 Caldwell-Pope and 6-foot-4 Alex Caruso. The Lakers’ recipe for success has been imposing size from across all five positions on both ends of the floor. With the addition of Harrell, Los Angeles doubled down on its preference for two-way players without giving up size.

And despite lacking a perimeter arsenal, Harrell is adept in bullying his way into the shaded area. Against the Suns, he scored 23 points built on 10-for-13 shooting from the field, to go along with 10 rebounds. He didn’t attempt a single 3 and he shot just 3-for-8 from the line. If you peek into his shot chart, he only made one field goal outside the painted area — a fadeaway on the left wing.

In his six years in the league, Harrell is 5-for-59 from beyond the arc. Still, that shouldn’t be a cause for concern considering his overall shooting is at least 60 percent. This season, he’s up to averages of 14.7 points and 6.6 rebounds, together with a healthy diet of 0.7 steals and 0.8 blocks.

The Lakers don’t need Harrell to have an outside presence. Even without AD and LeBron, Kuzma, Caruso, KCP, and the rest can fill in that void. Last season’s Sixth Man of the Year has made a career in the paint while creating havoc for opposing defenses. The thing for him now, especially with all the injuries in LA, is that he needs to increase his averages. Whether it’s scoring or rebounding, he needs to put up more to give the Lakers a fighting chance every game. The least he could is continue to improve his career-best 72.5 percent free throw clip.

Harrell doesn’t really rely on set plays for him to be effective but maybe it’s time to explore more options to give him better scoring opportunities. From being the best player off the bench last season, the Lakers need a lot from Harrell now more than ever.  — Yoyo Sarmenta