Big Question: Who is the Celtics’ barometer for success?

Jayson Tatum is the Boston Celtics' main weapon, but if they want to make a deep playoff run, they'll need consistency from other players as well. 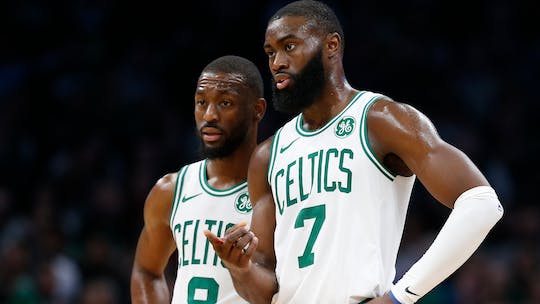 Kemba Walker nailed his signature stepback jumper in the closing moments against the Golden State Warriors which proved to be the dagger in the Boston Celtics’ 119-114 victory on Sunday. It was a gutsy win by one of the hottest teams in the league.

With a six-game winning streak and a 31-26 record, the Celtics right now are a much different team from the squad that struggled with injuries and COVID-19 protocols early in the season. Since the All-Star break, Boston has been tearing up teams, raising their net rating from the bottom half of the league to ninth.

All thanks to crisper ball and player movement and key lineup changes like unleashing “Time Lord” Robert Williams and staggering starter minutes, the Celtics are back to dark horse contender status, currently in fifth place in a tight Eastern Conference race. The more pressing questions the Celtics face with 15 games left in the season have more to do with the playoffs and their chances against the East's heavyweights.

Is the tandem of Jayson Tatum and Jaylen Brown going to be enough in the postseason? How will the addition of Jabari Parker shape the frontcourt? Do the Celtics bench have the firepower to surprise opponents? As a team with championship aspirations, the Celtics have a lot of concerns.

Kemba Walker never got a strong footing to start this season and has struggled to find consistency while getting back into form. He underwent a stem-cell injection in his left knee during the offseason that forced him to miss the first set of games.

Since his return, the Celtics have been extra cautious, not allowing Walker to play on back-to-backs. The team has a 20-17 record with him in the lineup this season and 11-9 without him.

After an underwhelming start, Walker is slowly finding his rhythm but has yet to regain his All-Star self. In 37 games so far, he's averaging 17.8 points on 40.1 field goal shooting, 3.9 rebounds, and 5.1 assists. Those aren’t bad numbers by any stretch, but those aren’t Kemba numbers at all.

Interestingly, Walker’s best season statistically was during the 2018-19 season, a year before he went to Boston. The last time he suited up for the Charlotte Hornets, he posted a career-high 25.6 points on 43.4 percent shooting (second-best in his career), alongside 3.2 triples, 4.4 boards, 5.9 dimes. He was torching defenses left and right and went on his way to an All-NBA Third Team selection.

If you’re the Celtics who already have a ton of scoring in Tatum and Brown, you don’t necessarily need 25 points from Walker. However, what you do want are his aggressiveness and fearlessness. At the peak of his powers, Walker would be a head-scratcher for opposing teams. And at 30 years old, it’s safe to assume that he still has his complete offensive arsenal of layups, stepbacks, floaters, and 3-pointers.

Walker has to be the third option for the Celtics to complement Tatum and Brown. In the playoffs, teams will definitely load up on the two stars and as the point guard, he has the responsibility to direct where the ball is headed. At the very least, Walker has to rekindle his clutch gene like he did against the Warriors. A ton of Cardiac Kemba will be needed come playoff time.

Tatum and Brown are definitely the heavy-hitters for the Celtics. But the missing piece for them right now is consistency from Walker. -- Yoyo Sarmenta

Jaylen Brown is key to a deep playoff run

Getting Walker back to his Cardiac Kemba form or somewhere close would be awesome for a Celtics team that too often relies on isolations and pick and rolls to get points.

While a healthy and humming Kemba Walker is nice to have in the playoffs, the Celtics’ answer for most of their questions is Jaylen Brown.

The Celtics first-time All-Star has mostly been terrific this season, posting career numbers in scoring (24.6 points per game) and efficiency (56.6 percent effective field goal percentage). He's turned into the two-way perimeter threat NBA teams have coveted at the top of the draft.

Boston cannot afford any inconsistencies from Brown. Jayson Tatum has proven that he's the unquestioned offensive star on the team, but Brown needs to continue his incredible play for the Celtics to advance deep in the postseason.

In the first round, where they are likely to face any of the Atlanta Hawks, Miami Heat, or New York Knicks, Brown is going to play a huge role as a secondary attacker and scorer when he faces those teams' second-best perimeter defender. Ditto for a potential matchup against the Philadelphia 76ers, who will most likely use Ben Simmons on Tatum. Whether or not Brown can punish his matchup in Tobias Harris or Danny Green is going to be a key talking point in that series.

Brown’s play was pivotal in the Celtics’ dismantling of the Milwaukee Bucks in the playoffs last year. He'll likely need to muster the same effort against Milwaukee this year, but may have a tougher time with the Bucks' new personnel. And who knows what the Brooklyn Nets will look like in the playoffs? Brown becomes much more important as a defender in that series if ever, trying to contain the historically transcendent offense of the Big Three.

In fact, expect Brown to be the Celtics’ go-to option against their opponents’ best wing players, next to Marcus Smart. If the Celtics hope to make the Finals, Brown needs to be prominent on both ends of the floor for them to upset higher-seeded teams. -- Miguel Flores