Milwaukee's starting shooting guard only played nine minutes before suffering an injury to his left foot vs. Miami. 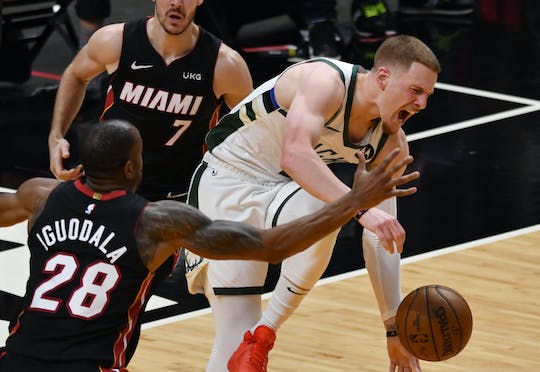 The Milwaukee Bucks will be without one of their most versatile players for the rest of the playoffs.

Donte DiVincenzo has suffered a torn ligament in his left ankle and will be out the remainder of the postseason, the team announced Friday. DiVincenzo suffered the injury early in the Bucks’ eventual Game 3 win against the Miami Heat on Thursday night.

DiVincenzo had an MRI in Miami that revealed the injury and, per the team, further updates on his status will be provided as appropriate.

DiVincezno was forced to leave the game after starting it and playing nine minutes, finishing scoreless after shooting 0-for-4 from the field.

He enjoyed a career season for the Bucks, averaging 10.4 points, 5.8 rebounds, 3.1 assists, and 1.1 steals while shooting 37.9% from 3-point range in his first full season as a starter for Milwaukee.

In his absence, the Bucks are likely to turn to PJ Tucker, Pat Connaughton and, perhaps, Bryn Forbes, to fill DiVincenzo’s role for the rest of the playoffs.