The Bucks forward is expected to have an MRI on Thursday to determine the severity of his left MCL sprain. 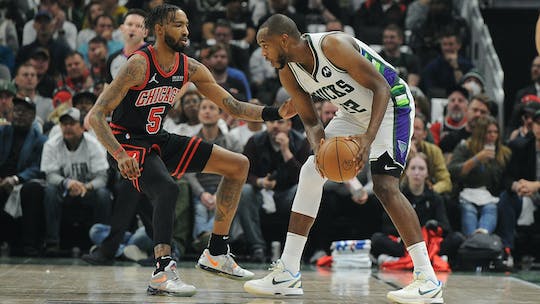 Milwaukee Bucks forward Khris Middleton’s status for the rest of his team’s first-round playoff series with the Chicago Bulls is uncertain after the three-time All-Star left Game 2 on Wednesday night with a knee injury.

Bucks coach Mike Budenholzer said after the Bucks’ 114-110 loss that Middleton will have an MRI on Thursday on the injury — a sprained medial collateral ligament in his left knee.

Middleton exited Game 2 with 6:49 left after his left leg gave out while he tried to plant on a spin move. Middleton initially tried to walk it off but eventually headed into the locker room.

Middleton had 18 points and eight assists before leaving the game. The 30-year-old averaged 20.1 points, 5.4 rebounds and 5.4 assists during the season.

He played a vital role in the Bucks’ title run last season, averaging at least 21.5 points in each of the four playoff series. He had 24 points, 6.3 rebounds and 5.3 assists per game in the NBA Finals.

“Obviously Khris is one of the best players on the team,” Antetokounmpo said. “If he’s not able to be with us, it going to be a tremendous loss for us. But at the end of the day, we’ve got guys that hopefully can step up and we can still do our job and compete and enjoy the game, and hopefully it’s not something very serious and he can come back and join us very soon.”

“He’s always been positive and he knows the type of team that we are and how resilient we are,” Bucks guard Jrue Holiday said. “We just want him to get back as quickly as possible and be healthy so he can come out here and help us win games.”

Middleton’s situation represented the most notable of the Bucks’ many injury issues.

Bobby Portis left Wednesday’s game with a right eye abrasion after taking a hit to the face from Chicago’s Tristan Thompson late in the first quarter.

“We anticipate that he should be fine with some time,” Budenholzer said.

Reserve guard George Hill hasn’t played in this series due to an abdominal strain. Budenholzer said before Game 2 that Hill isn’t expected back in the short term and that the team will monitor how the 35-year-old Hill guard progresses over the next “handful of days or more.”