Caruso suffered the wrist injury midway through the 3rd quarter of the Bulls' loss to the Bucks on Saturday (PHT). 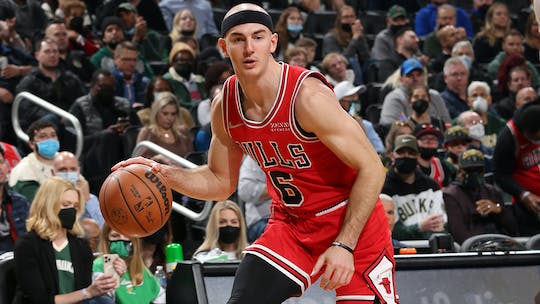 Bulls guard Alex Caruso will be sidelined at least 6-8 weeks after fracturing his right wrist.

Chicago Bulls guard Alex Caruso sustained a fracture of his right wrist in Saturday’s (PHT) game against the Milwaukee Bucks. Caruso will undergo surgery early next week and be reevaluated in 6-8 weeks, according to the team.

The injury occurred midway through the third quarter of Chicago’s 94-90 loss to Milwaukee after a fall following a flagrant foul from Bucks’ Grayson Allen. Allen was called for a flagrant foul 2 against Caruso as the Bulls guard was driving to the basket.

“For Alex to be in the air like that and for (Allen) to take him down like that, he could have ended his career,” Bulls coach Billy Donovan said. “(Allen) has a history of this. That, to me, was really dangerous. I really hope the league takes a hard look at something like that because he could have really, really seriously hurt (Caruso).”

Caruso landed on his right side and remained on the floor under the basket for a couple of minutes before staying in the game.

“The dude just grabbed me out of the air,” Caruso said.

“I think Grayson (did) nothing malicious, went to block the shot,” Budenholzer said. “I think it’s a close call, and they went with flagrant 2. I’m not going to disagree. It’s right on the border and that’s the direction they went.”

Caruso, who just returned to the Bulls lineup on Jan. 19 after being sidelined for nearly one month due to a foot injury as well as dealing with the league’s Health and Safety Protocols, is averaging 8.4 points, 3.9 rebounds and 3.9 assists for Chicago this season.