Bulls and Raptors show how playoff teams are built

The Chicago Bulls and Toronto Raptors are trending upwards after a return to the playoffs this season. 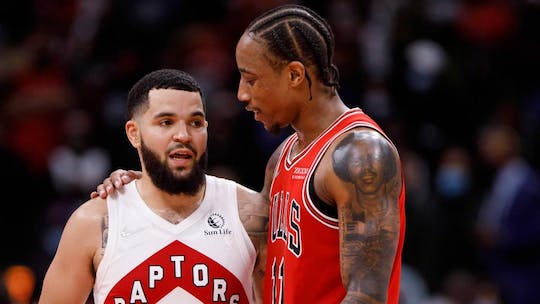 In NBA 2K, building a playoff team is easy. Even without the Force Trade option, there are so many ways to stock your team with All-Star players. In the real world though, there’s so much more to consider. Players aren’t just numbers on a screen. They have to be consistently good, and more importantly, consistently available. They have to fit a team’s identity and playing style as well.

The Chicago Bulls and the Toronto Raptors showed two different ways to build teams that could not only make the playoffs but stay in the fight for a playoff spot for years to come. And no, they didn’t force any trades.

After missing the playoffs for three years, the Bulls changed things up before last season. They hired former Denver Nuggets general manager Arturas Karnisovas to run their team. He was quiet last season before finally making a splash by acquiring Nikola Vucevic to pair up with Zach LaVine, the lone All-Star of the team. That move served as the foundation of their offseason moves coming into this season.

Armed with cap space and moveable assets, the Bulls were able to pull off moves to acquire DeMar DeRozan, Lonzo Ball, and Alex Caruso. Those moves ended up forming the core of the team this season. From having just a Dunk Contest participant a few years ago, the Bulls were able to build a team with three All-Stars and two promising defensive playmakers. The trades and free-agent signings fast-tracked Chicago’s return to the playoffs.

Beyond the talent that these players brought, it was their mindset and professionalism that changed the identity of the team. DeRozan is a consummate professional that’s out to perform every night. Caruso and Ball brought their unselfish defensive games to the team. These three set the tone early this season. Almost immediately, they gave Chicago a different look. The air in the Windy City was back! They were flying around the court, forcing turnovers, and getting out on the break.

The new-look Bulls rose to the top of the East back in February. Even with their early season success, they still showed there’s room for improvement. Injuries and inconsistent play to finish the season dropped them to sixth place. This season should still be considered a big win for them even if they were eliminated in the first round. They now know that they have a core that can take them to the postseason.

If the Bulls relied on trades and free-agent signings, the Raptors took a different approach. They were able to return to the playoffs behind the continued growth of their homegrown talent.

While the rest of the East loaded up on new players, Toronto actually lost an All-Star in Kyle Lowry coming into the season. Rather than overpay for a free agent, they handed the keys of the team to Fred VanVleet and Pascal Siakam, two of the longest-tenured players on the team.

At the start of the season, it seemed like it was a big mistake not to sign a big-name player. They started out 9-11 and were out of the playoff picture. It looked like this season was going to be a repeat of last season.

It didn’t take long for the Raptors to find their way. The new leaders of the team, VanVleet and Siakam, set the tone with their hard work and full commitment to the team’s system. They were pretty good too. VanVleet took on the role left behind by Lowry and played it to perfection. He became a hard-nosed, no-nonsense point guard that simply produced on a nightly basis. Because of that, he was named an All-Star this season. Siakam made up for missing the start of the season with consistent All-Star level play the rest of the way.

Young players like Scottie Barnes, OG Anunoby, Chris Boucher (all Raptors draftees), and Gary Trent Jr. followed the lead of their two leaders. They played their roles to perfection and when needed, rose to the occasion to deliver bigger games than usual.

This season just goes to show that the Raptors are one of the best-run franchises in the league. Masai Ujiri was able to rebuild a playoff team with players that their coaching staff successfully scouted and developed. Toronto showed that as long as they have players willing to buy into their system, they will always have enough in the cupboard to make the playoffs.

The Bulls and Raptors both took a step forward this season. Now, the harder part comes. NBA 2K doesn’t capture the increased expectations from fans and ownership to win consistently. Chicago and Toronto proved they can win in the regular season to make the playoffs. They now need to prove that they can also go far in the playoffs.