The rookie guards take home the honors for the month of January. 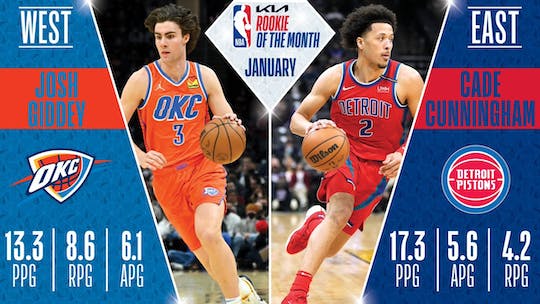 Detroit Pistons guard Cade Cunningham and Oklahoma City Thunder guard Josh Giddey have been named the NBA Rookie of the Month for January.

Check out highlights from their standout play last month.

The No. 1 overall pick continued to pick up his pace this season with his best month yet. He led all rookies in points (17.3 ppg) and ranked second in assists (5.6 apg) to go along with averages of 4.2 rebounds, 1.1 steals and 0.8 blocks. He scored a career-high 34 points with eight rebounds and eight assists against the Denver Nuggets on Jan. 25. He tallied his second career triple-double in a win against the Cleveland Cavaliers on Jan. 30. The Pistons (12-38) are currently the 14th seed in the East standings.

The No. 6 overall pick takes home his third Rookie of the Month honor with averages of 13.3 points, 8.6 rebounds and a rookie-leading 6.1 assists during January. He scored a career-high 19 points in a win against the Brooklyn Nets, then he bested that performance eight days later with 21 points against the Charlotte Hornets. In addition, he tallied his first career triple-double with 17 points, 13 rebounds and 14 assists against the Dallas Mavericks on Jan. 2. The Thunder (15-34) are currently the 14th seed in the West standings.