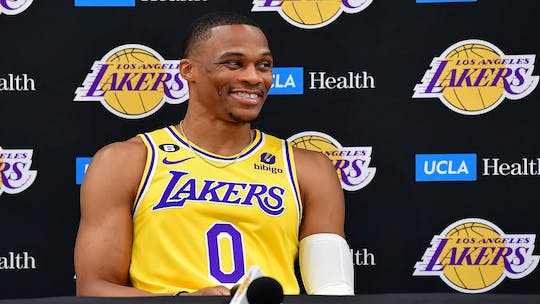 “Whether they want me here or not, it doesn’t really matter,” Westbrook said. “My job is to be a professional and show up to work as I’ve always done.”

After a turbulent 2021-22 season coexisting with Lakers stars LeBron James and Anthony Davis and playing under coach Frank Vogel, Westbrook was honest about what his second season in a Lakers uniform might look like with a new head coach (Darvin Ham) and more court time with James and Davis.

“I don’t have that answer right now,” Westbrook said. “But I know it’s about competing. If we compete, the rest of it will take care of itself.”

And after sitting in crunch time occasionally last season, Westbrook sounded more accepting of the possibility of a lesser role both to start and end games in the 2022-23 campaign.

“I’ll do what’s best for the team,” Westbrook said, “and do whatever is asked of me.”

What will the Lakers ask of Westbrook? Ham revealed he has “several options” on who to start in the backcourt, including Westbrook, Dennis Schröder, Patrick Beverley, Kendrick Nunn and Austin Reaves.

The Lakers have tempered expectations for this season after finishing 11th in the Western Conference last season at 33-49. They saw players miss a combined 246 games due to injuries or illnesses, most notably James (26 games) and Davis (42). Westbrook also shot poorly from deep (29.8%), was lax with his ball protection (3.8 turnovers per game) and finished 386th out of 605 players in individual defensive rating.

After Westbrook exercised his $47 million player option, the Lakers reportedly gauged the market for him in various trade packages.

“For any player on your team, you always have to be evaluating the roster,” said Rob Pelinka, L.A.’s VP of basketball operations. “If we have to continue to upgrade our roster throughout the season, we will.”

But the Lakers also believe the former Kia NBA MVP and all-time leader in triple-doubles will have a bounce-back season. Westbrook showed flashes of his past excellence last season with his durability (78 games), triple-doubles (10) and team-leading numbers in rebounds (7.4) and assists (7.1) per game.

It also helps that the Lakers will have James and Davis fully healthy for the start of training camp.

“We look forward to being a part of the journey with him this year,” James said. “It will be a great year for him, and we’re going to be right there with him.”

The Lakers believe that Westbrook, James and Davis will have more than 21 games together this season. The team retained none of its veteran free agents in favor of signing a handful of young players (Lonnie Walker IV, Troy Brown Jr., Thomas Bryant, Damian Jones and Juan Toscano-Anderson). The Lakers also bolstered their backcourt by bringing Schröder back and acquiring a defensive menace in Beverley.

“We got to sit down and talk about what works and what doesn’t work,” Davis said. “Hopefully all the things that didn’t work, we can figure it out.”

Lastly, the Lakers hired a head coach they believe can make Westbrook feel more empowered and accountable. Ham has gained respect in NBA circles for the qualities he has shown during a nine-year  playing career as well as three assistant coaching gigs, including Milwaukee’s recent championship run.

“Russell Westbrook is a great part of our team,” Pelinka said. “He’s a person of high character, work ethic and one of the greatest ever to play the game. I think Coach Ham will bring another level out of him.”

The Rundown: Alvarado drops 38 in win over Nuggets