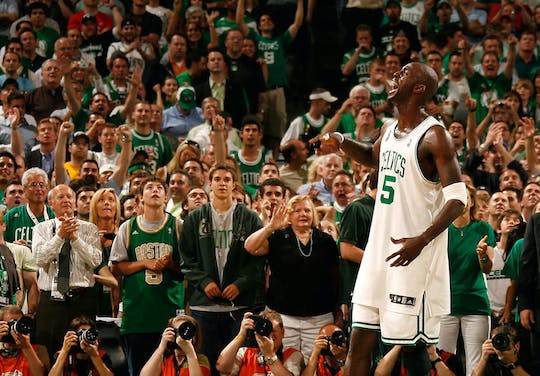 Kevin Garnett celebrates during Game 6 of the 2008 Finals.

The most recent of Boston’s 17 NBA championships featured Kevin Garnett, one of the most visibly competitive stars in the franchise’s history.

The Celtics announced Garnett’s name and number will hang alongside those of the other 22 individuals that are synonymous with all those banners.

The Celtics acquired Garnett during the 2007 offseason, trading a multitude of players and picks to the Minnesota Timberwolves in exchange for the 2004 MVP. Teamed up with fellow future Hall of Famers Paul Pierce and Ray Allen, Garnett experienced a new level of team success in Boston. The Celtics went 66-16 in Garnett’s first season with the franchise, eventually topping the Los Angeles Lakers to capture the 2008 NBA championship.

The multi-talented forward won the league’s Defensive Player of the Year award that season in addition to the first of five All-Star appearances with the franchise. He and the Celtics returned to the Finals in 2010, losing to the Lakers in seven games.