Celtics coming together at the right time

The Celtics have shown that they are a force to be reckoned with in the 2022 NBA Playoffs. 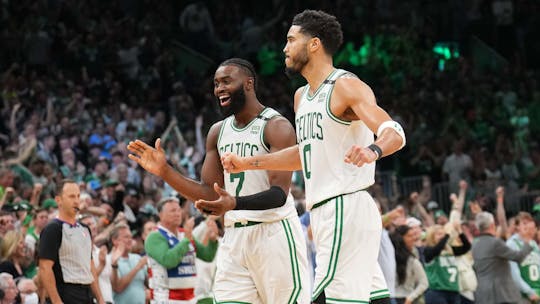 It took some nerve to come into Game 6 on the road, fresh off a disheartening loss in Game 5, to pull off what the Boston Celtics did against Milwaukee. They saved their season, thanks to a late barrage from Jayson Tatum, who put up a legendary 46-point performance.

The Celtics we have in the 2022 NBA Playoffs are undoubtedly the best Boston team we’ve seen since 2008. Sure, some of the late-aughts Celtics still had their Big 3 and there was a time when Kyrie Irving and Gordon Hayward were a part of this exact nucleus of players. But this team feels fresh. Whether that’s because of their young duo of Tatum and Jaylen Brown finding their mojo in the biggest moments, Al Horford fighting off Father Time, or Marcus Smart’s exaggerated bravado, the 2022 Celtics just feel like they're bound for more.

Remember that just last January, this same Celtics team was dead in the water, barely clinging to a play-in spot before their incredible turnaround. Going into Game 7 against the Bucks, they needed to save this special season.

Facing the defending champs and the best player on earth in Giannis Antetokounmpo, the Celtics played tough. Game 7 was ugly in the best ways a basketball game could be ugly. Players were physical. Shots weren’t going in. There was a glint in everyone’s eyes – a recognition that they were writing a page in basketball lore. Players from both sides were shaky. Both teams almost couldn’t get 40 points on the board to end the half.

Then, something clicked. In classic Game 7 fashion, the role players started making their mark. Luckily for the Celtics, they pushed until the end of the regular season to bag the second seed. Game 7 at home opened the room for role guys like Grant Williams and Payton Pritchard to gain confidence. The pair combined for 11 triples with Williams putting up a postseason career-high 27 points and Pritchard adding 14 points.

There was also plenty of inspiration to draw from Horford, who looked like Buster Douglas fighting off Mike Tyson. This was the battle of the series – a one-sided battle, but one Horford knew he didn't have to dominate for Boston to win. He only needed to be the proverbial punching bag. Giannis was nearly unstoppable this series, averaging 33.9 points, 14.6 rebounds, and 7.1 assists and looking like the second coming of Shaquille O’Neal. Horford took all the punishment from Giannis, who kept barreling down the lane and posting him up.

In Game 7, Horford finally wore the Greek Freak down, with a little help from Boston’s swarming defense. Giannis was the only Buck who had anything going in the first half. He shot 6-for-9 to start the game, then made just 3-of-14 shots in the second half. The invincible basketball alien finally looked tired.

It’s in conquering Giannis that this Boston team might have found their moment. This was billed as the series that could decide the Eastern Conference and the Celtics won it with a statement in Game 7.

Looking ahead, the Celtics now face the Miami Heat – a tough group with about the same pieces as the squad that conquered them in the Eastern Conference Finals in 2020. They were the first seed, but Boston was the team playing the basketball in the league to close the season, except for the now-eliminated Phoenix Suns.

Miami certainly doesn't feel like a team playing with destiny behind them. Boston does.

Report: Nuggets trade JaMychal Green to Thunder for No. 30 pick