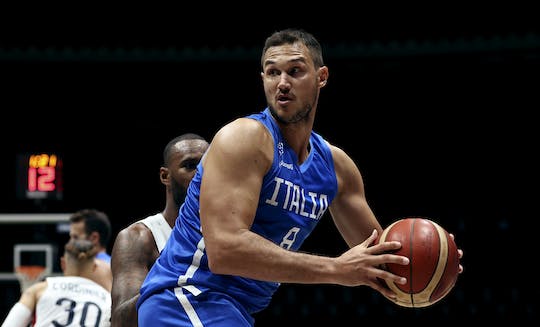 BOSTON (AP) — The Boston Celtics said Friday that Danilo Gallinari tore the anterior cruciate ligament in his left knee while playing for Italy during a FIBA World Cup qualifier against Georgia last month.

Gallinari tore the same ligament in 2013. The Celtics did not provide a timeline for the forward’s return. But such injuries typically involve a recovery process of up to a year, meaning it would be unlikely for the veteran to play this season.

The Celtics signed Gallinari to a two-year, $13 million contract in July. He averaged 11.7 points for Atlanta last season.

The 34-year-old Gallinari is averaging 15.6 points over 13 NBA seasons with the Hawks, New York, Denver, the Los Angeles Clippers and Oklahoma City.

Video of the injury shows Gallinari receiving a pass on a fast break and taking a step before he starts to hobble. In the days afterward Gallinari initially expressed he was diagnosed with a meniscus injury.

In an Instagram post shortly after the team announced his new diagnosis, Gallinari said he would work to return to action as soon as possible.

“This has been a tough week for me as I have learned the extent of my injury,” the post read. “This game means everything to me and not being able to be on the court with my Celtics teammates hurts. I plan to give everything I can to the Celtics organization and my teammates as we hunt for a title.”

Since being drafted in the first round by the Knicks in 2008, Gallinari bounced around before helping Atlanta make a surprise Eastern Conference finals run in 2021.

The Celtics were hoping Gallinari and Malcolm Brogdon, another free agency pickup, could bolster their rotation after falling to the Golden State Warriors in the NBA Finals.

Gallinari said in July that assuming a reserve role the past two seasons in Atlanta has helped him enter a phase in his career in which he isn’t the centerpiece of an offense.

The Portland Trail Blazers visit the Brooklyn Nets, live at 4:00 AM on NBA TV Philippines.