Choosing the starters for the East All-Stars 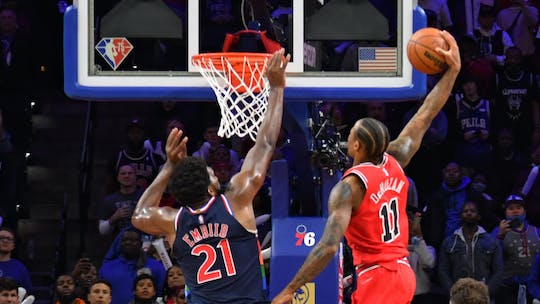 The 2022 NBA All-Star festivities will be televised across free-to-air channels TV5 and One Sports, as well as NBA TV Philippines (available on Smart's GigaPlay app and Cignal TV).

For me, Kevin Durant, Joel Embiid, Giannis Antetokounmpo, and DeMar DeRozan are locks as starters in the East. If I were to choose strictly by statistics for the last guard spot, I'd have to go with Trae Young. If I wanted more star power, I'd go with James Harden but I don't think Harden has played great this year, particularly in shooting the ball. I'd love to put LaMelo Ball as a starter because I think he and Ja Morant are the most exciting players in the league. But I don't think he deserves to start quite yet. Young has been scoring and assisting at incredible rates. The Hawks have a bad record but it's not because of him.

Although our favorite Twitter personality is out with a knee sprain, Durant was having a stellar year with MVP numbers to show for. My favorite NBA human, Giannis, hasn’t shown any signs of slowing down after their championship. If averaging 28.6 points and 11.3 rebounds aren’t enough, he also has one of the best personalities in the league and is easily the most lovable one on this list. My last frontcourt pick is 50-point Tatum. Well on his way to becoming the Celtics’ franchise player and nearing a double-double average, Jayson Tatum is no doubt an All-Star, and let’s not forget he’s only 23!

Out of all my picks, DeRozan is the player that I think is most deserving of the All-Star title. His last All-Star selection was when he was with my beloved Toronto Raptors, and I’m glad that he has finally found his way back to superstar status with the Bulls. DeRozan is not only playing excellently, but he’s also proving to all those haters that he’s fit to lead a team to championship caliber. Now it wouldn’t be a CC take if there wasn’t a unique choice, so my final spot goes to my city’s very own Fred VanVleet. Averaging 21.7 points and 7.0 assists, he’s taking over Kyle Lowry’s spot quite effortlessly and that’s why he’s deserving to be an All-Star.

It’s an All-Star Chicago Bulls backcourt with DeMar DeRozan and Zach LaVine. DeRozan has not only shown his clutch genes this season but has also led the Bulls to possible championship contention. His superb mid-range game, excellent ability to get to the line, and being sixth in the league in scoring add to his All-Star inclusion as well. LaVine, meanwhile, may be underrated but definitely deserves a spot. He is playing his best year, averaging 24.9 points, and is a threat on any part of the court. His backcourt tandem with DeRozan is the reason why the Bulls are on their way back to the playoffs.

Without Kyrie Irving and at times even James Harden, the Brooklyn Nets have relied heavily on Kevin Durant and he has heeded the call. He averages 29.3 points per game, the third-highest ever in his career at 33 years old. Giannis Antetokounmpo continues to deliver the numbers on both ends on the floor, averaging 28.6 points and 11.3 rebounds a game with still a strong contention for MVP this season. Lastly, Joel Embiid may not be the most popular, but he definitely gets the job done. Even without Ben Simmons, Embiid is leading the Philadelphia 76ers to playoff contention, ranking third in the league in points per game after Durant and LeBron James.

The Atlanta Hawks might be 12th in the East, but Trae Young has been on a tear this season. He’s fifth in the league in scoring (27.9 ppg) and third in assists (9.5 apg). He also holds the record for the highest points scored in a game this season when he chucked up 56 points against the Portland Trail Blazers. DeMar DeRozan has been a revelation for the Bulls as he has embraced his role as the closer. He’s defying data and analytics by proving that the mid-range jumper can still be deadly in today’s game.

KD is the best scorer in the NBA right now. He’s a walking mismatch and his All-Star selection is self-explanatory. Giannis has remained dominant with his relentless drives—it takes a whole team to stop him. With his improving outside shooting and playmaking, I would say he’s definitely a better player now compared to his championship year. Joel Embiid is currently fourth in the MVP rankings and he recently had a dominant 50-point outing. He’s been relatively healthy this year and if he continues to lead his team to victories, he might have a chance at the award. And yes, if he says he can be Shaq, Dirk, or Kobe, let him be. He didn’t say he was as great as them—he basically said he’s that versatile as a player. Let him be because he has those moves in his bag.

Durant, Giannis, Embiid, and DeRozan were easy selections for me. There are a lot of players to choose from for the last slot. But as much as I would love to vote for Miles Bridges (not Jayson Tatum) for that last slot, the voting format prevents me from putting him in the backcourt. There are three players to choose for this spot: Trae Young, who is putting up absurd numbers; James Harden, who is always in All-Star consideration; and Zach LaVine, who is leading the Bulls to one of the East’s top teams. My vote goes to Zach LaVine. He’s been more consistent and Chicago has exceeded all expectations and is becoming a legit NBA Finals contender. What better way to reward the Bulls by not just having one but two All-Star Starters.

For the East frontcourt, they were quite obvious picks. It was the guards that I really took my time with. I settled with two elite guards who have been the difference-makers for their teams: DeMar DeRozan and James Harden. Counted out and considered ‘washed up’ just a season ago, DeRozan has come back with a vengeance, and I’m all for it! He has been playing out of his mind and has shown flashes of ‘The Mamba’ with his mid-range game and endgame heroics. Can you say, “back-to-back game-winners”? Oh yeah, plus the Bulls are a top two seed in the East. Then there’s the Nets who have had a rollercoaster of a season. Despite all the chaos, one guy has been consistent throughout and that’s James Harden. Missing out last year due to injury, Harden is a prime reason the Nets are contending at the top of the East standings.

The East seems to be pretty straightforward, especially with Kevin Durant out. Giannis Antetokounmpo and Joel Embiid are putting up MVP-like numbers night in and night out. Jimmy Butler should start because of all the intangibles and his leadership. And who doesn’t like a good comeback story like DeMar DeRozan’s? One guy I’d like to see as a starter is Darius Garland, who has brought the Cleveland Cavaliers in serious playoff contention. But who do I take out?