If Game 1 is any indication, Chris Paul's Finals MVP campaign is on the right track. 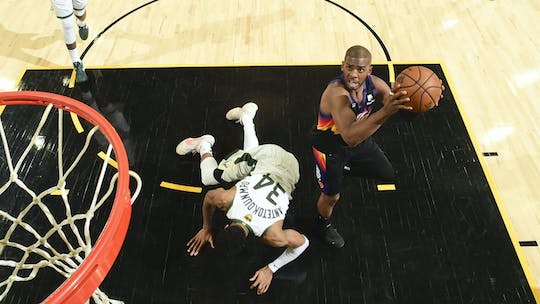 Over the last few weeks, Chris Paul's impact on the Phoenix Suns has been a topic of great humor within Twitter and Reddit. It might have been an exaggeration to say that Paul's addition was the sole reason for the Suns' success this season. After all, Phoenix's young core had shown promise as early as last year’s bubble where they went 8-0 and almost broke their franchise's playoff drought right there.

Who's to say that an improved Devin Booker and Deandre Ayton along with steady contributions from Mikal Bridges and Kelly Oubre Jr. wouldn't have been enough to make a run this year? Twitter has taken the joke so far that they even had Paul taking credit for Ayton learning to dribble.

All debates should have already been put to rest when the Suns outlasted every Western Conference contender to make the Finals, and then Paul pretty much sealed the coffin in his debut.

After several unlucky breaks and disappointing playoff performances, Chris Paul finally made his first Finals appearance after 16 years in the league. There was no way he was playing a dud in Game 1.

CP3 slows his body down, takes the bump and floats it in en route to 32 PTS! #PhantomCam #ThatsGame @Suns take Game 1 of the #NBAFinals presented by YouTube TV... Game 2: Thursday at 9pm/et on ABC pic.twitter.com/gHKeInK0J2


Facing a Milwaukee squad that can throw much bigger defenders at him every possession, Paul meticulously dissected the Bucks’ defense. Milwaukee started the game switching all pick-and-rolls. Paul, the best in the league at making centers look foolish, did damage against Brook Lopez, either getting off his own shot or finding Ayton down low for an easy shot against a smaller defender.

2nd half of Game 1 on ABC pic.twitter.com/YRk9u79kNo


When the Bucks tried their drop coverage, Paul used his hall-of-fame midrange touch to punish them. The Bucks entered the game with a clear gameplan to stop Chris Paul. They were the best defense in the playoffs by rating, but Paul just made them go back to the drawing board.


Game 1 was a master class of the Chris Paul experience.  When the Bucks were threatening to rally in the fourth quarter, Paul was the calming presence the Suns needed to gather composure. It's been this way since the regular season. Beyond the raw stats, Paul's leadership is the intangible ingredient that has pushed this Suns over the edge. Where most young teams would crumble, the Suns always had Chris Paul to show them the way.

“There's no scouting report that says Chris Paul can't get a bucket,” said Devin Booker. “I mean, he obviously gets his team involved. He's the greatest leader to play the game. But he's been a bucket for a very long time.”

Specifically, Paul got 12 buckets out of 18 attempts in Game 1. He finished with a monster stat line of 32 points, nine assists, and four rebounds. Though people say that Paul stole a rebound from Ayton, depriving him of a 20-20, Paul did feed Ayton several times down low for easy buckets. He wouldn’t have been in range of a 20-20 without Paul. The Suns wouldn’t be in the Finals without Paul. Booker wouldn’t look as comfortable as a lead scorer without Paul.