Chris Paul did not get the fairytale ending that he wanted but it should not diminish what he accomplished with the young Suns team. 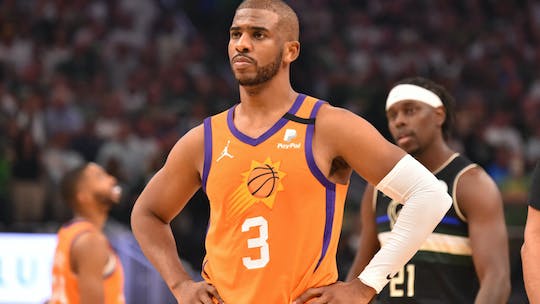 The Phoenix Suns met a tragic end to what was supposed to be their best chance at a championship. The team could not find a way to stop Giannis Antetokounmpo, who received the Finals MVP trophy after dropping 50 points, 14 rebounds, and five spectacular blocks.

However, losing in six games in the NBA Finals should not discredit the effort that Phoenix put in this year. Chris Paul, in particular, had quite the season, exhibiting why he is considered one of the best point guards in NBA history.

“They made timely shots, we didn't. We didn't get stops when we needed to and they just beat us,” said Paul.

After 16 seasons in the league, CP3 has yet to finish with a championship, but that should not be the focus of the conversation.

Paul continues to play meaningful minutes for his team. He’s not a washed up veteran who’s just filling a roster spot -- he’s the main floor general and facilitator of the Suns’ system.

Not only was Paul spewing out these numbers like he’s in his prime, the Point God gave the Suns the push they needed. He successfully built a winning culture by leading by example.

CP3 made sure that every guy on the roster had the goal of reaching the championship. He didn’t let a slow start discourage him. He kept fighting and believing in what his team could do.

“We grew all season long. Especially starting out the way we did. Nobody probably expected us to be where we are except for us,” said Paul.

It was an incredible season for the Suns, who went from not making it into the playoffs to being a few games shy of the Larry O'Brien Trophy.

They defeated LeBron James and the LA Lakers, Nikola Jokic and the Denver Nuggets, and Paul George and the LA Clippers. These teams were all in the Finals conversation -- and yet Phoenix made it all the way to the top.

Paul’s entry was so valuable as he literally took a young team to the Finals. And even though their performance didn’t lead to the Suns’ first championship, they proved that they were capable of making it big.

“He brought us all the way up here,” teammate Deandre Ayton said about Paul. “We know the type of detail we have to really emphasize to have consistency, to play at the level like this and the type of competitor he is, it was contagious. He taught everybody a lot.”

Not a lot can do what Paul does at 36. He might be going through his last few years in the league, but there are still no signs of him slowing down.

“This is my second time coaching him, I know what he puts into his craft, I know the dedication and so when I hear those sentiments about his career because he hasn't won a championship, it's just silly. It's hard enough to make it to the NBA, let alone be an all-time great, which is what he is,” said Suns coach Monty Williams.

While it’s too early to say what the future will look like for him and the Suns, there’s one thing that is for sure: he’s not done yet.

Ultimately, not ending with a title should not muddle the fact that he has had an exceptional season in a Hall of Fame-worthy career. But CP3 will continue to seek that championship goal, making the most out of the time he has left in the NBA.