CJ McCollum offers his support to injured teammate Zion Williamson as he envisions a bright future in New Orleans. 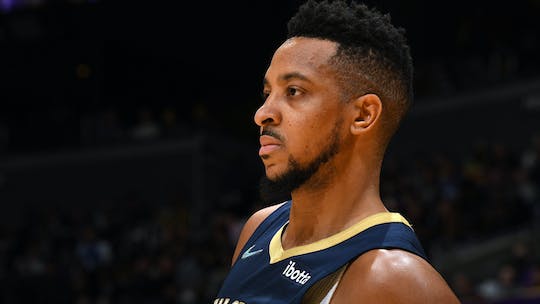 McCollum defended Williamson for not touching base immediately after the Pelicans acquired McCollum from the Portland Trail Blazers before the trade deadline.

“He’s trying to accomplish some things individually to get back to the team,” McCollum told NBA.com. “That’s important for people to realize.”

During NBA All-Star weekend last week, McCollum shared that he and Williamson had not communicated since the Pelicans acquired McCollum from Portland on Feb. 8. The revelation prompted more criticism toward Williamson’s commitment to the Pelicans while spending the entire season rehabbing his surgically repaired right foot. McCollum said the two have since communicated before stressing, “I don’t feel like he needed to reach out to me.”

The first reason: McCollum has juggled his own busy schedule with moving to a new city, adjusting to a new team and staying in touch from afar with his wife (Elise) and six-week-old son (Jacobi James). During All-Star weekend, McCollum participated in the NBA’s 3-point contest, spoke at the NBA’s Tech Summit and oversaw various meetings as the president of the National Basketball Players Association. McCollum has plans to connect again with Williamson for a longer conversation, but he added his own busy itinerary delayed that plan.

The second reason: McCollum sounded understanding of Williamson’s frustration with missing the entire 2021-22 season thus far.  After all, McCollum spent part of this season away from Portland for an extended period of time for different reasons. He missed a combined 18 games while recovering from a partially collapsed lung before spending time with his wife for the birth of their first child.

“I just want to be there for him and be someone to lean on who has gone through injuries and doubt and anxiety and all of the things that are associated with being removed from the team due to injury,” McCollum said. “He’s a really young, talented player that has got a lot on his plate right now. I think it’s important for him to focus on the process and on the rehab. The rest of the things will handle itself. But when he gets back, we’ll hit the ground running. That’s a guy that changes any franchise and their trajectory.”

McCollum could not help but smile and grin when envisioning what that dynamic would look like.

The Pelicans also have seen that it is not hard to play with a guy like McCollum, either.

In the Pelicans’ 123-95 win against the Los Angeles Lakers on Sunday, McCollum finished with a team-leading 22 points while shooting 8-of-15 from the field and 4-of-7 from 3-point range along with eight assists. Afterwards, Pelicans coach Willie Green credited McCollum and forward Brandon Ingram (19 points, eight assists) for “having some balance in how they attacked.”

“He’s been great. We can all see what he’s doing on the floor and his ability to score and to free up other guys,” Green said. “Now teams can’t load up as much on Brandon and can’t double Jonas as much when he’s on the floor.”

Not that this surprises the Pelicans. During his 8 1/2 seasons in Portland, McCollum averaged 19 points while shooting 45.3% from the field and 39.6% from deep along with 3.4 assists. Portland relied on point guard Damian Lillard for his outside shooting and dynamic playmaking as the Blazers made eight consecutive playoff appearances and one trip Western Conference finals trip with that formula. The Blazers only dealt McCollum to shed salary and stockpile assets in what has become a rebuilding season.

“He’s been through a ton in this league already in terms of high-stakes games and playing in the conference championship and playing in a number of playoff appearances,” Green said. “His leadership is valuable for our group because he has so much experience. He’s bringing that to the table.”

McCollum brought another element when he gathered at the dinner table last week with Ingram and Green. Then, McCollum stressed a few messages.

McCollum told Ingram “to be the most aggressive version of himself and not worry about me.” McCollum stressed that his season goals simply pointed to “doing things the right way” both with how he prepares for and plays in games. And McCollum assured Green that he will “allow him to coach me” with ongoing dialogue and collaboration.

“It’s really important that you have that camaraderie and that off-the-court relationship that will transfer to better chemistry on the court,” McCollum said. “We’re building that.”

Ingram argued that has happened because McCollum has followed through on the expectations that Green outlined.  A day after that dinner, the Pelicans upset the top-ranked Phoenix Suns. Three days later, the Pelicans kept up the same energy against an inconsistent Lakers team. Since joining the Pelicans, McCollum has scored 30-plus points in four of his first six games while also averaging a career-high 5.2 assists.

“It’s us caring about the game of basketball,” Ingram said. “He’s very similar in his approach with the way he watches film and the way he communicates. He’s receptive to information.”

Still, McCollum admitted that he still has encountered a few learning curves.

McCollum reported fighting fatigue while playing his first five games in seven days. In between his various appearances and meetings during All-Star weekend, McCollum studied more of the Pelicans’ playbook. And he has already missed living in Portland, which he described as “a place that will always be near and dear to me.”

McCollum’ six-week-old son has not received clearance to travel from the family’s pediatrician. Additionally, McCollum’s wife has pondered career possibilities after working in the Portland area as a practicing dentist. Before the Pelicans’ recent trip, McCollum has lived at a hotel in New Orleans and estimated that his family won’t join him at his new work residence until late March.

“It’s more of the family stuff that was tough,” McCollum said. “Not being with my family for a while is going to be hard. It has been hard. But it’s part of the business.”

McCollum is not used to this side of the business. This marks the first time he has ever been traded. But McCollum has become used to helping a competitive Western Conference team in a small market with reaching the next level.

With the Pelicans (25-36) ranking 10th in the West, they appear within striking distance behind the Lakers (27-33), LA Clippers (32-31) and Minnesota Timberwolves (32-29) to finish the season with a favorable seed for the Play-In Tournament.

It also starts with McCollum offering support for Williamson amid his rehab in hopes they can form the partnership that McCollum envisions.

The views on this page do not necessarily reflect the views of the NBA, its clubs or Turner Broadcasting