Jordan Clarkson has continuously evolved his game from his rookie year in Los Angeles to his ongoing career year in Utah. Not too long ago, he didn’t have any, not a single one, and the first thing you’ll notice then was his knack for scoring. Feed Clarkson the ball and it’s highly likely he’ll put his head down and quickly toggle through his long list of ways to score.

Scoring was what Clarkson was known for in college, why he was hired by the Los Angeles Lakers, and how he stayed afloat in a very choppy, competitive league.

In his very first NBA game, Clarkson scored eight points off the bench, mostly on free throws. It was far from a spectacular debut, but it was okay, and was in the realm of what you’ll get from someone drafted in the second round.

What was remembered from Clarkson’s debut had nothing to do with his debut. It was Kobe Bryant and Dwight Howard jawing at each other. It was first-round pick Julius Randle breaking his leg. It was definitely not Clarkson shooting 5-of-6 from the line.

Clarkson’s role as a young Laker was that of a supporting role, that was pretty much a given since Day One. He was the guy working a small scene, often making more of the material given to him. Like a Paul Giamatti-type, producing memorable, quality minutes on a consistent basis off the bench.

When he wasn’t doing that, Clarkson’s performance as a rookie starting for the Lakers screamed All-Rookie First Team: 15.8 points, 5.0 assists, 4.2 rebounds, and 1.1 steals in 38 games.

This blank canvas version of Clarkson had started out quietly, almost inconsequentially. Get in and out, get both feet wet, get buckets, get better. When his first year was over, the numbers looked more than okay, definitely more than what you’d expect to get from someone drafted in the second round: 11.9 points, 3.2 rebounds, and 3.5 assists in 25 minutes per game.

"I use that as motivation anytime I step out on the court. I always had that chip on my shoulder. It’s just a bigger one now that I got drafted low,” Clarkson said then.

Clarkson does most of his damage either close to the basket or from long midrange, where 27 percent of his attempts came from in his rookie year. Beyond the 3-point line wasn’t yet a familiar territory for Clarkson.

There was instant pain in that first season, where in the 59 games Clarkson showed up for, he only won 11. Whether that pain of losing was fresh or recurring, only Clarkson knows. He spent three more years in LA, getting decent stats on a bad team, getting buckets (he bumped up his scoring average to 15.5 in just his second year), getting better.

A trade to a LeBron James-led Cleveland team in 2018 could’ve been it—the chance for Clarkson to showcase his talent amidst battle. The battle between the Cavaliers and the elite teams, sure, but also the battle between Clarkson and the rim. In the playoffs, the rim won.

In 19 playoff games, Clarkson’s jumper betrayed him more times than befriended him, and he ended up with an average of 4.7 points per game on 30 percent shooting. In the finals, his team was swept. More pain.

Then the summer of ‘18 came and some changes were made, some on the surface, others much deeper. Clarkson went full-on JR Smith, covering his upper body with tattoos. Portraits of his parents, his daughter, and a childhood friend who passed away are some of the pieces that populated his once ink-free body. It was that same summer when Clarkson showed up in Indonesia, new tats peering out his Pilipinas jersey. 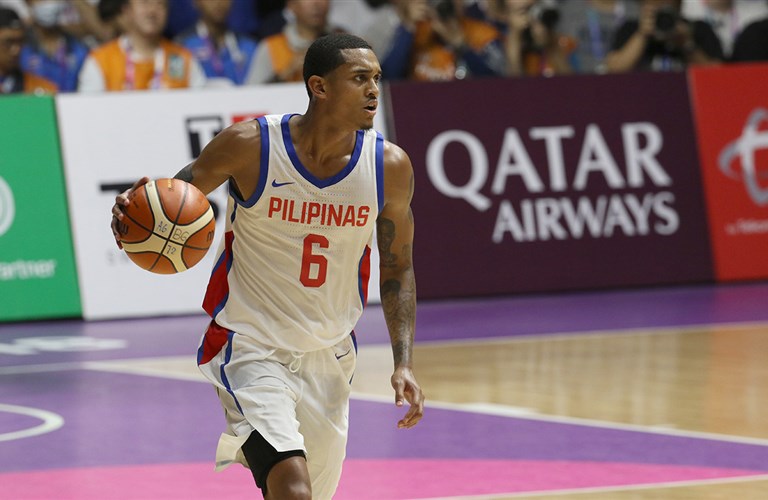 Jordan Clarkson played for the Philippines in the 2018 Asian Games (Photo credit: FIBA)

These days, the tattoos have covered his arms up to his neck—with a bonus Willie Nelson tribute on his thigh. Basing off of ink decisions, Clarkson’s tolerance to pain has evolved through the years.

On the court, his evolution shows in various ways. The obvious example is in the scoring department, where he averages a career-high 17.2 per game. How he gets those points is more interesting. Whereas before he took a bunch of midrange shots, now he takes them at just a one percent clip of total shot attempts. Clarkson now makes a living at the 3, where he takes an eye-popping 8.7 attempts per game (tied with his teammate Donovan Mitchell for sixth in the league). Compare that to his rookie year, where he attempted only two per game.

Clarkson’s not just chucking it and putting shots up because it’s in fashion. He’s hitting an average of three 3s a game (good for 15th in the league) at a 35 percent rate. Here’s a bonus gem of a stat: he’s currently on an 82-game streak of hitting at least one 3 per game. He’s doing all this, while being mindful of defensive assignments and switching off the ball.

“I have to think defense first and offense comes second, even though it comes naturally,” Clarkson said in an interview with The Game on One Sports.

All of these changes, both surface-level and soul-deep, have added up at this point in Clarkson’s career. He’s primed to be named this season’s top sixth man for the league’s best team. He’s carved out an identity of his own, one built on hard work, patience, and pain. Mostly pain.

There’s the surface-level, like the one he felt when he had the word “sacrifice” tattooed on the side of his neck. Then there’s the soul-deep ones, stemming from all those losses in LA, losing to China and Korea, getting swept in a forgettable finals, getting passed on 45 times in the draft, and so on.

All these are part of his evolution, this ongoing, non-linear path to the best version of Jordan Clarkson.

“Everything is a process,” Clarkson said. “I’m still taking steps towards greatness and becoming the best basketball player and person I can be.”