Clippers' Paul George (Health and Safety Protocols) out vs. Pelicans

The Clippers' star swingman, Paul George, will not play in the Play-In Tournament game vs. New Orleans. 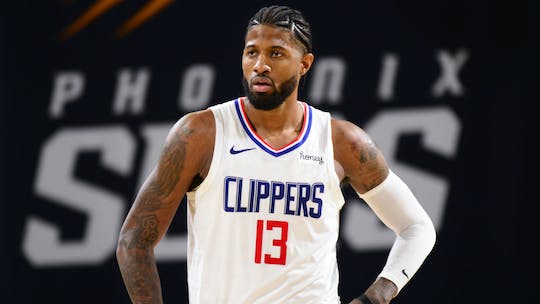 Paul George has entered the NBA’s Health and Safety Protocols and will miss the LA Clippers’ Play-In game against New Orleans on Friday night (10 ET, TNT) at Crypto.com Arena.

“We feel really bad for Paul and hope for a speedy recovery,” Lawrence Frank, president of basketball operations, said in confirming George’s status for the elimination game at Crypto.com Arena.

Frank said George wasn’t feeling well Thursday and the team learned of his diagnosis Friday morning. The team didn’t specify what the diagnosis was.

George’s absence is a huge blow to the Clippers’ hopes of making the playoffs. They must win to earn the No. 8 seed and a first-round matchup with the NBA-leading Phoenix Suns.

“This is another challenge for our group,” Frank said. “The group has dealt with challenges all year. We’ve had guys in and out of the lineup, we’ve dealt with overcoming large deficits and yet this group has always responded.”

George scored 34 points in a 109-104 loss at Minnesota on Tuesday in the first play-in game. That defeat cost the Clippers the No. 7 seed and a first-round matchup with Memphis.
The Clippers were 22-25 without George in the lineup this season.

He returned late last month after missing 43 games with a torn ulnar collateral ligament in his right elbow. In his first game, he rallied the Clippers from a 25-point deficit to beat Utah 121-115.

“I really think like all the things that we’re going to be asking of our guys tonight, they’ve all done throughout the year,” Frank said. “This isn’t going to be a brand new experience for any of our guys.”

Besides George, the Clippers were already without Kawhi Leonard, who hasn’t played all season while rehabbing from an ACL tear.

“He continues to progress with his rehab, but there’s still no timetable for his return,” Frank said.

The team recently got Norman Powell back and he teamed with George to help the Clippers win their last five regular-season games. Powell missed two months with a broken bone in his left foot.

Despite the absence of Leonard and multiple injuries, the Clippers finished 42-40.