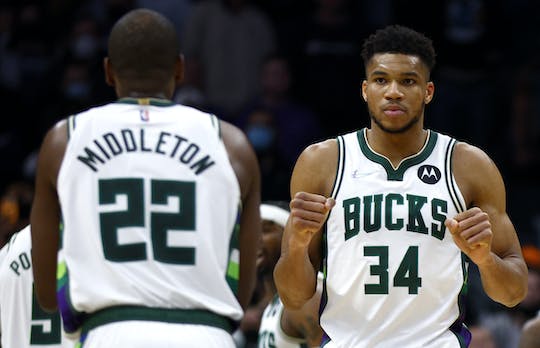 MILWAUKEE (AP) — Giannis Antetokounmpo and the defending champion Milwaukee Bucks are coming out of the All-Star break knowing they’ve got work ahead just to earn home-court advantage in the first round of the playoffs.

Such is life in the Eastern Conference, where only 5 1/2 games separate the top seven teams.

“I just feel like if you lose one game, you go from third to fifth,” Bucks forward Bobby Portis said Friday. “If you win two games, you go from fifth to second. Just try to string together four or five good games and hopefully put ourselves in good position to be right where we want to be.”

The Bucks (36-24) entered the weekend fourth in the East, only three games behind the conference-leading Chicago Bulls but just 2 ½ games ahead of the seventh-place Toronto Raptors. The Bucks play their first game since the All-Star break Saturday when they host the Brooklyn Nets.

Milwaukee understands that seeding means only so much in the postseason.

The Bucks lost in the Eastern Conference finals in 2019 and fell in the second round in 2020 despite having the NBA’s best regular-season record both years, though the bubble format of the 2020 postseason prevented them from having home-court advantage. They were the No. 3 seed in the East last season and won their first title in half a century.

“I think we have a great team,” Antetokounmpo, the two-time NBA MVP, said during the All-Star Game festivities. “We’re in a good place. We’ve got to keep building our chemistry, keep coming together, building good habits. Every year there are five, six teams that have a chance to win the championship. As long as you’re there, that’s all you can ask for.”

The standings suggest there might be that many teams in the East with reason to believe they could make the NBA Finals. The Bucks realize the depth in the East this year could make their playoff position more important.

Not only do the Bucks need a late-season surge to assure themselves of home-court advantage in the first round, but they also want to avoid falling below sixth place and landing in the Play-In games to determine the East’s seventh and eighth playoff teams.

“I’ve never seen a playoff race this close from top to bottom,” All-Star forward Khris Middleton said. “Nobody really wants to go into that Play-In game. You want to make the playoffs, but nobody wants to be in that Play-In game situation. You can expect all teams to be in playoff mode from here on out, if it didn’t start before the All-Star break. We all know what’s at stake.”

Milwaukee has struggled with consistency while dealing with a variety of injuries, most notably the back problem that has sidelined Brook Lopez since the season opener.

The Bucks have boasted one of the league’s best defenses since coach Mike Budenholzer’s arrival in 2018, but the Bucks haven’t been quite as effective on that side of the floor without their 7-footer.
Lopez underwent surgery Dec. 2 and rejoined practice this week, but the Bucks still aren’t saying when he might be ready to play again. They do expect him back at some point this season, though they acquired Serge Ibaka at the trade deadline to add some frontcourt insurance.

“He’s definitely missed,” guard Jrue Holiday said of Lopez. “I don’t think he gets enough credit. I’ll definitely give him the credit. What he does for us in so many ways – defensively, offensively – the way he takes care of us at the rim on both sides of the floor.”

The Bucks know they must play better to have a chance at repeating. The schedule will test them as they get ready for the postseason.

They’re at Fiserv Forum for their first three games after the All-Star break, continuing a stretch of six consecutive home games. But once that homestand ends, they’ll be on the road for 12 of their final 19 regular-season games.

“We can’t afford to drop games that we shouldn’t be dropping or have a multiple-game skid,” Middleton said. “From here, we’ve just got to be playing our best basketball and act like it’s the playoffs right now, because it’s that close.”