Did Steph Curry just have his best Finals showing yet? The greatest shooter of all time never seems to run out of tricks. 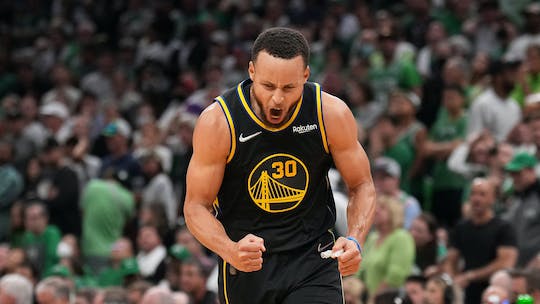 Steph Curry’s performance in Game 4 of the 2022 NBA Finals was an affirmation that the greatest shooter in the history of the game can still rise to the occasion. We all know he’s the unequivocal star of the Golden State Warriors. We all know he can single-handedly win a game. We know he’s always one bucket away from a potential scoring barrage.

And yet, watching Curry dissect the Boston Celtics’ defense and score 43 points while grabbing 10 rebounds was a reminder that there’s nothing like seeing the greats perform at their best when the stakes are high. In an essentially must-win situation on the road, Curry took it upon himself to will his to victory and tie the series against the Celtics.

There was probably a universal and collective reaction to his floater with under four minutes remaining to push the Warriors’ lead to three. He was one-on-one with Robert Williams III and danced his way to get past the big man. In the ensuing play, he drilled the 3-pointer as Derrick White tried desperately to defend.

Watch that play again. White took his eyes off Curry for barely a second when Draymond Green had the ball. Curry was asking for it at the top, faked, ran hard, got the ball, used a slight jab step, and then drained the triple. Broadcaster Mike Breen’s “Bang!” perfectly encapsulated the play.

Curry knew his team needed him. He knew that their backs would be against the wall if they lose. Going down 3-1 would be a tough climb.

“It means everything,” Curry said about what his performance meant. “Knowing the sense of urgency we had to have tonight to win on the road and keep some life in the series, get home-court advantage back and try to create some momentum our way… proud of everybody in terms of our physicality, our focus, perseverance throughout the game. 2-2 is way better than 3-1 going home.”

Not only was Curry in his element. He was talking, flexing, and engaging the crowd. There was a fire within him and he burned everyone on the Celtics.

“There are times where you feel like you have to kind of be more aggressive to score, just based on [the] flow of the game and how they are guarding us and where I can see some advantages,” Curry said. “But also we understand they are a great defensive team that you can't -- your normal sets are just the normal flow. Probably isn't going to be there for the meat of the game just because that's what they are good at and how they dominate games on that end of the floor.

With the NBA Finals tied at 2-2, the series is far from over. The Celtics might tweak their defense and won’t allow Curry to beat them. Inversely, this might be the beginning of a Curry onslaught. He might get his groove and dominate the next two or three games.

No matter what happens next, Game 4 was a signature outing for Curry, adding to his already illustrious career. We’ve had so many Curry moments and this has to be right up there given the magnitude and the stakes.

So, was Game 4 the best Finals performance of Steph Curry?

“I can't rate my performances, though. Just win the game,” he said.