The Warriors went full on petty after they silenced their doubters with another championship. 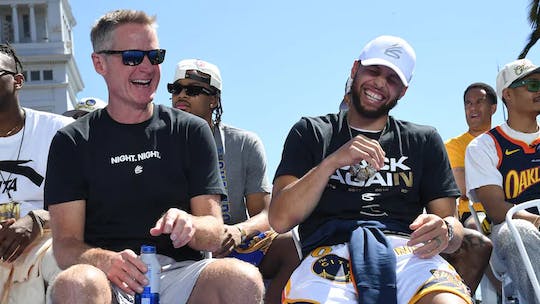 It was a tweet from March. It was really short – three words, no context. The tweet was from Jaren Jackson Jr. of the Memphis Grizzlies. It said, “Strength in numbers,” with the clapping hands emoji.

“Strength in numbers” is, of course, the Golden State Warriors’ mantra, but in this particular moment, after the Grizzlies beat the Warriors by 28 points, JJJ must have felt that the Grizzlies owned it.

Fast forward to June, and Klay Thompson is at the postgame press conference wearing a championship hat and a championship shirt. He’s a four-time NBA champion. He hasn’t forgotten about that tweet.

Don’t say they didn’t warn us.

When the Warriors were booted out of playoff contention last year (by the Grizzlies, no less), Thompson was emotional and Steph Curry was expectedly frustrated. Curry was also forward-looking. He was hopeful.

“You don’t wanna see us next year,” was the warning.

Well, next year came and here we are. After all the bad takes, the doubt, the inaccurate predictions, the Warriors are on top of the basketball world once again. And they’re letting everyone hear it. They have the receipts.

After Thompson’s little nostalgic moment after Game 6, Ja Morant and Draymond Green had their own exchange on Twitter about a Christmas Day meetup. Morant said a Grizzlies-Warriors game on Christmas should be done in Memphis, but Green fired back with, “The champs play at home.”

im coming to you then. tell em book dat shit . im on yo block https://t.co/fuJu2jPOwd

Green has been on a bit of a mean streak lately, not letting anything go now that the Warriors are champs once again. He went from putting on a Boston Celtics shirt with the 18th banner stolen by the Warriors:

Even after the dub the Warriors aren't letting up on Boston pic.twitter.com/syDC4kCDhr

The Warriors convincingly won in Game 6, but Green wasn’t done up until the scheduled Game 7 of the Finals, which wasn’t necessary:

Getting ready for Game 7 tonight… 🔒in!!! Happy Father’s Day

All these — the shirts, the Twitter clapbacks — it all goes back to the Warriors’ competitive spirit, and how they were pretty much counted out when they were missing out on the playoff fun.

"The fact that when we started this season, the conversations about who we were as a team and what we were capable of, clearly remember some experts and talking heads putting up the big zero of how many championships we would have going forward because of everything that we went through … So we hear all that, and you carry it all and you try to maintain your purpose, not let it distract you, but you carry that weight and to get here, it all comes out. It's special,” Curry said after winning his fourth title.

Now that the Warriors have silenced all the doubters and dunked on all the haters, they won’t let them forget too.

“I'm the petty king so I know all about everything,” Curry said, proudly.

The celebration mixed with extreme pettiness reached its peak at the Warriors championship parade in San Francisco, which saw Green tell everyone else what he really feels and Thompson basically dropping all the chill. In just a span of hours, Thompson lost his championship hat, dropped one of his championship rings, stumbled to the ground and knocked over a fan, downed a bottle of cognac, and danced ala Michael Jackson.

At one point, he posted an Instagram Story of a fan carrying a banner that said, “Strength in Numbers.” Below it was the now iconic Klay Thompson catchphrase that alluded to the Grizzlies’ Jackson: “Freakin’ bum.” He tagged the official Memphis Grizzlies account, of course.

But the petty king of all petty kings perfectly summed up all the pettiness at the parade. All throughout the playoffs, from the dismantling of the Denver Nuggets to the mastery of the Celtics, Curry would hit them with the “night night” celebration when the series is already in the bag.

With the fourth championship secured, Curry saved the best for last: Night, night with the mic drop.