Portland's six-time All-Star guard reaffirms his loyalty to the franchise and says he's 'waiting patiently to let things unfold' there. 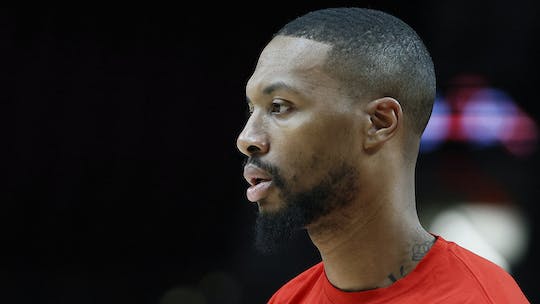 In numerous outlets and in numerous formats, Portland Trail Blazers star guard Damian Lillard has made it clear time and again he wants to play for the team his entire career.

Tuesday’s trade that sent his longtime backcourt running mate, CJ McCollum, to the New Orleans Pelicans has not shaken Lillard’s resolve nor his loyalty to the Blazers.

Still, the trade did not leave Lillard unaffected as the tandem had been teammates since 2013-14, but began to blossom as a duo in 2015-16 when McCollum had his breakout season and was named Kia Most Improved Player. Portland had reached the playoffs every season since they drafted McCollum. However, the Blazers struggled in the postseason, reaching the Western Conference finals only once while being eliminated in the first round five times.

Lillard spoke with Casey Holdahl of Blazers.com following the trade that sent McCollum, Larry Nance Jr. and Tony Snell to the Pelicans about his bond with McCollum, the state of the franchise moving forward and how he’s mending from recent surgery on his abdominal injury.

When asked about his thoughts on the state of the team, Lillard said he’s hopeful Portland can regain its place as a playoff team while also voicing his support for coach Chauncey Billups and interim GM Joe Cronin.

“For me, my heart is Portland Trail Blazer. I want to win it. I know that I have a plan that’s going to put me on my best level when I come back to play. And I want our team to fit that,” Lillard said. “I’m a huge fan of Chauncey Billups. … And I’m a Joe Cronin fan. In his position I think it takes being bold and doing bold things, doing what you see fit and standing on it. He’s told me that our plan is to build a winning team, not to rebuild. Because we had a prior relationship to him becoming GM, I trust his word.

“I’m just waiting patiently to let things unfold and allow him to execute his plan. Once we get there and we see what that looks like and what that is, then I’ll have, I guess, more feelings than I have now but you’ve got to allow him to do his job and see what that finished product is. That’s just where I am.”

As for the trade of McCollum, Lillard told Holdahl that he and his former teammate had conversations in the past about how their duo could someday be broken up. However, as Lillard says, knowing that breakup could come and dealing with it are very different things.

“This is something that me and C, we talked about it over the years, like, this being a possibility,” Lillard said. “But time went on we both knew that it’s going to come a point where we might not be a backcourt anymore, whether that was him getting traded or me getting traded.

“It is what it is, we both knew that this point would be coming. But that don’t make it no easier to deal with. I think that’s where I am now. Me and him literally talked about it happening, the possibility of it and it was likely and stuff like that, and I still woke up this morning like, sad. It’s actually done.”

Following the trade, Lillard also took to Instagram and wrote a heartfelt post to McCollum as their nine-year playing relationship came to an end.

The McCollum trade marks the second multiple-player trade the Blazers have made in advance of Thursday’s deadline. On Friday, Portland sent Norman Powell and Robert Covington to the LA Clippers in exchange for Eric Bledsoe, Justise Winslow and Keon Johnson. That move was widely seen as financial, as it put the Blazers below the luxury tax threshold.

Lillard, a six-time All-Star, has been sidelined since the start of the year with an abdominal injury that required surgery. It is unclear when, or if, he will return this season, but Lillard was at the team’s practice facility on Monday putting up a few shots.