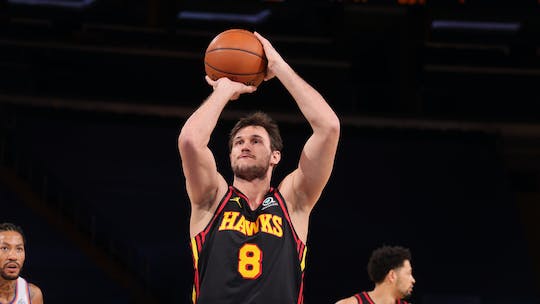 Boston has bolstered its Eastern Conference-champion rotation with the addition of veteran forward Danilo Gallinari, the team announced July 12. Per ESPN’s Adrian Wojnarowski, the Italian-born sharpshooter agreed to a two-year contract with the Celtics after being traded to and waived by the San Antonio Spurs earlier this offseason.

The sixth overall pick in 2008, Gallinari played the last two seasons with the Atlanta Hawks, averaging 12.4 points while shooting 39.2% from 3-point range. The 6-foot-10 big man offers a versatile offensive set that should give Boston even more options in a frontcourt rotation that includes Robert Williams, Al Horford, Jayson Tatum, Grant Williams and Luke Kornet.

After reaching the NBA Finals for the first time since 2010, the Celtics have added Gallinari and former Kia Rookie of the Year Malcolm Brogdon during the offseason. Boston is aiming to become the first back-to-back Eastern Conference champion since Cleveland in 2018.