Do the Spurs have enough to creep back into the playoffs?

The San Antonio Spurs' chances of making the playoffs this season will depend on DeMar DeRozan's consistency and the contributions they get from their young core. DeMar DeRozan has been leading the Spurs this season in points (21.0) and assists (7.0).
After a humbling 24-point defeat on Tuesday versus a sub-.400 team and looking ahead to their matchup against a rejuvenated championship contender, it’s time to discuss the San Antonio Spurs.

As of writing, the Spurs are currently ninth in the Western Conference with a 24-24 record. They are behind the two surging teams as the seventh place Dallas Mavericks (28-21) are on a season-high five-game win streak while the eighth place Memphis Grizzlies (25-23) have won three consecutive. The Golden State Warriors, for all their tumbles this season, have managed to come up with a 24-27 record as the 10th seed, the cutoff for the play-in tournament.

So in between a blowout loss against the lowly Cleveland Cavaliers earlier this week to cap off a head-shaking 2-7 homestand and bracing for impact against the new-look, still-undefeated-since-the-trade-deadline Denver Nuggets, it’s only apt to discuss the Spurs’ playoff hopes.

On one hand, the Spurs hunting for a postseason spot quietly and methodically is the most Spursy-way possible to go about their business. Every year, just when everyone thinks that a team coached by Gregg Popovich will either not contend for the title or be entirely out of the playoff picture, they always find a way. The mindful avoidance of fanfare and hoopla have virtually made them a consistent low-key threat. Even during their championship years and deep playoff runs, they always went under the radar.

This season, the Spurs were among the seven teams that didn’t have a national TV game in the first half of the season. After the All-Star break, they had three on their schedule. Of course, you have to give it to teams with more star-studded lineups and more compelling storylines. The Spurs are no LA Lakers, but they’re not a tanking team either.

When the Brooklyn Nets picked up LaMarcus Aldridge, who spent five and a half seasons in San Antonio, the Spurs were an afterthought. With regards to the team’s signing of Gorgui Dieng, many agreed that it was a good pickup but it was hardly a ground-breaking acquisition.

But a huge reason why the Spurs have been a successful franchise in the last two decades is that they don’t operate under the spotlight. Even mulling their playoff chances already feels like a contradiction to their belief system. They essentially don’t want to be talked about.

Then again in the Orlando bubble, the Spurs missed the playoffs for the first time since the 1996-1997 season, a year before the franchise drafted Tim Duncan. After 22 consecutive winning seasons and five championships, the door finally closed on them.

With the Spurs free-falling in the current standings and the 11th place New Orleans Pelicans looming in the background, will they even get a clear shot in the play-in round? Will they end with another losing season?

There’s no need to press the panic button just yet. 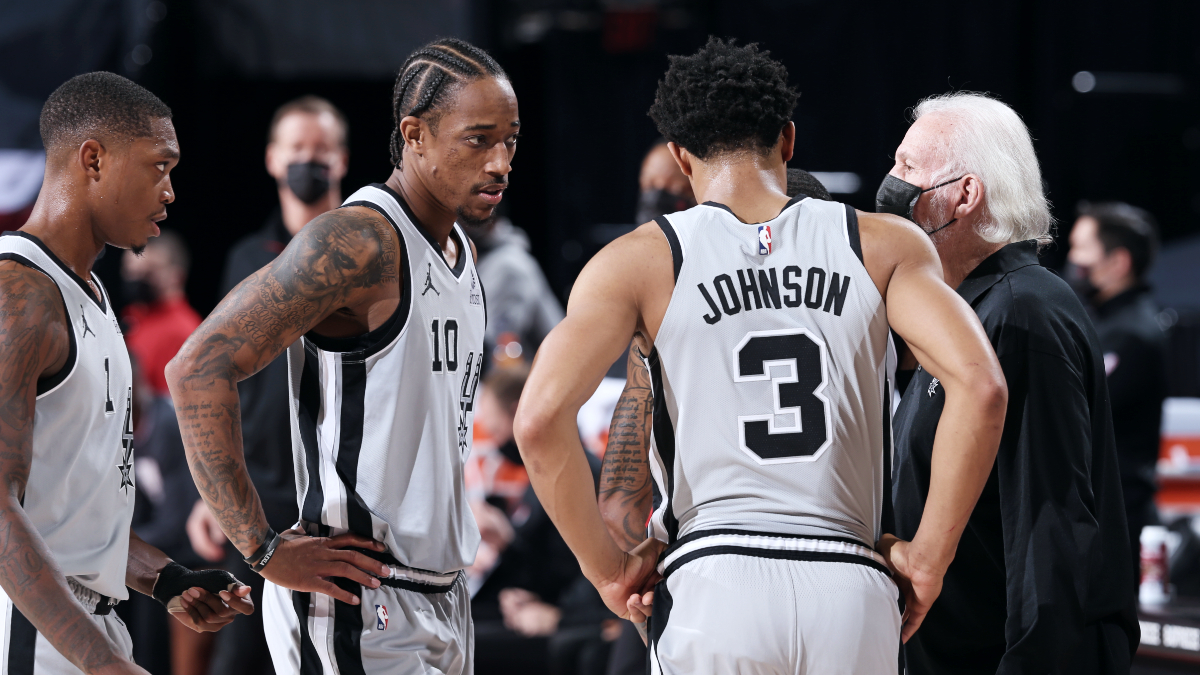 The Spurs are equipped to make a late playoff push that can instantly turn their record around.  Their roster, though lacking in big names, is certainly no pushover.  The lineup is the Spurs’ own take on the small ball revolution while containing a potent mix of youth and veteran leadership.

The usual notions of having a backcourt and frontcourt are blurred in the different combinations that Popovich and his staff employ. Derrick White and Patty Mills share ball-handling duties but the Spurs could even go four guards deep by placing Dejounte Murray and DeMar DeRozan together with Rudy Gay or Jakob Poeltl.

Murray is a solid two-way player who has the athleticism and IQ to play bigger than his 6-foot-4 frame. He can play the point and have White and Mills move off-ball while guarding the best perimeter player from the opposition. The Spurs also have Keldon Johnson, who’s grown to be an indispensable forward who can cover a lot of ground on both ends. Poeltl, meanwhile, is a top 10 shot blocker which allows the defense to funnel opposing players into the paint. The revitalized Gay is likewise worth mentioning as a reliable stretch four.

The Spurs are also one of the few teams who make a tremendous effort in building through the draft, developing players, and maximizing their potential. For example, take Lonnie Walker IV, an 18th overall selection in 2018, whose absence due to a wrist injury is still hurting the team. The trio of Murray, White, and Johnson, meanwhile, were all picked 29th overall. The Spurs have a knack for finding young talent and developing them.

The central piece for the Spurs is of course their go-to guy, DeRozan. The team-leading 21.0 points and 7.0 assists are all very much needed every single game. At 31-years-old, he’s still a master of the midrange and an underrated defender.

For all the Spurs’ budding pieces, there are still glaring weaknesses that have led to their subpar performance. Playing a ton of small ball while making just 10.5 triples per game (tied for 28th in the league) and having the highest percentage of points from the midrange (14.1) are hardly ingredients for success. Poeltl needs to stop shooting 40.7 percent from the free throw line. DeRozan needs to bring his star power every game and being quiet in the clutch won’t cut it anymore. Saying that there’s room for improvement is an understatement.

At the end of the day, however, tanking is not part of the San Antonio vocabulary. The .500 record simply means that the team is neither outstandingly good nor are they awful. This is the most low-key situation for them to potentially slither their way into the play-in round.

Plus in a way, maybe it’s fitting that the Spurs are in an unpredictable situation. This is the latest mountain Popovich and his team will have to climb to prove to doubters, and more importantly to themselves, that they are still one of the best franchises in the league.
Read Next
Features

Beyond the Weight Room