Utah's star guard will have his status updated as Game 6 in the series looms on Friday (PHT). 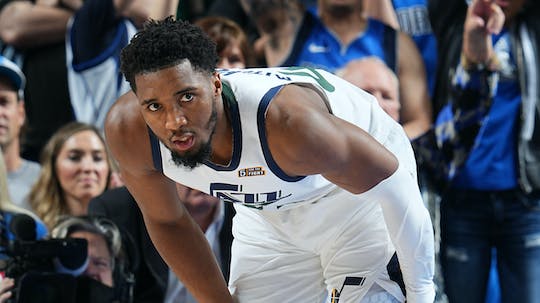 Utah Jazz guard Donovan Mitchell has no damage to his left hamstring, but is suffering from quadriceps contusions and will continue treatment heading into Friday's (PHT) Game 6 vs. Dallas, the team announced today.

The Jazz are expected to further update Mitchell’s status as Utah looks to stay alive in a series it trails 3-2.

Mitchell suffered his injury in the fourth quarter of Monday’s 102-77 blowout loss to the Mavericks in Game 5. The three-time All-Star immediately grabbed his left leg upon landing after attempting a leaping pass in traffic.

Mitchell downplayed the injury after the game, telling reporters “I’ll be fine” even as the team announced he would undergo further evaluation in Utah.

“We’ll see how I feel, but I’m a competitor,” Mitchell said.

Mitchell, who averaged 30 points in the first four games, scored just nine and missed all seven of his 3-pointers in Game 5.

“They’ve scrambled extremely hard,” said Mitchell, who is shooting 20% from 3-point range after being well over 40% the past two playoff years. “It’s a lot to continuously run teams off the line, and they’ve done a good job of it. They’ve made us uncomfortable.”

Any compromising effect on Mitchell would only further hinder Utah’s chances at once again tying this series. It seemed possible the Jazz might turn things around after their one-point, Game 4 win, decided by an alley-oop from Mitchell to Rudy Gobert.

Instead, Utah came out flat from the start in Game 5 and finished a woeful 3-for-30 from 3-point range. Per ESPN Stats & Info, that is the worst mark by any team with at least 25 attempts in NBA postseason history.