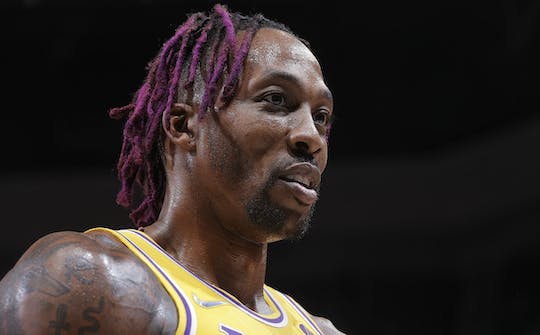 LOS ANGELES — The tension grew as Anthony Davis and Dwight Howard walked off the court. It then escalated as the two argued with each other. And then things peaked when they shoved each other along the team bench, prompting teammates to separate them in hopes that the pushing would not lead to anything even more serious.

It turns out the Lakers have much more serious issues, though, than integrating Russell Westbrook, absorbing injuries among their wings or even suffering a 115-105 loss to the Phoenix Suns on Friday at Staples Center to cement an 0-2 start.

Only four days into the regular-season, two Lakers teammates have argued publicly with more than just a few words.

“We’re competitors and just want to win games,” Davis said. “It’s over with.”

What caused this conflict between Davis and Howard? According to Davis, apparently nothing more than conflicting views on what he called “a pick and roll scheme.”

“We were upset about a play,” Howard said. “We both had a disagreement. We both just got into our feelings. It happens. We’re grown men. We’re trying to figure things out.”

Just as the game footage will not lie about the Lakers’ low shooting percentage (39.5%), their points in the paint allowed (52) or their turnovers (16), neither will the replays camouflage the Lakers’ scuffle between Davis and Howard.

During a timeout late in the second half, Davis shouted toward Howard’s direction while trailing from behind. Once Howard sat on the bench, Davis stood over him and shared his displeasure about something. Howard then stood up and stared at Davis, who then grabbed Howard’s arms. After Howard tried to pry his arms loose, LeBron James, Rajon Rondo, Malik Monk and Avery Bradley intervened.

“We have no issues with each other,” Howard said. “Don’t try to make this an issue between me and AD, or try to cause a problem with a team.”

“Ya’ll can look at it how ya’ll want to look at it,” Davis said. “That’s on ya’ll, but it’s in house with what we do in the locker room and what we say. We keep it to ourselves. After the situation happened, me and DH, we talked about it and we left it at that.”

In other words, Lakers coach Frank Vogel may not have to participate in a staged photo pretending to intervene on a fight as former Lakers coach Mike D’Antoni did. After a report suggested Bryant and Howard had a locker-room altercation, they both posed for a photo in which they pretended to box, while D’Antoni sat in between them on the trainer’s table.

“We have no issues with each other”

“Those guys loved each other. They talked it out,” Lakers coach Frank Vogel said. “That’s going to happen from time to time. I’d rather our guys care than not care.”

Therefore, Vogel contended that Howard did not play in the second half just so he could experiment with a small-ball lineup as opposed to any disciplinary measures.

During that time, Howard stood up either along the bench or along the baseline cheering his teammates profusely. It did not ignite the team’s play significantly. It also appeared overdramatic, at best, and contrived, at worst. But when the Lakers called timeout with 8:46 left in the third quarter, at least Davis reciprocated Howard’s high five.

Still, one could not help but wonder that the Howard-Davis dustup reflected other serious issues.

The Lakers have slogged through a 0-2 start after entering the season as favorites to finish first in the Western Conference. They have failed to take advantage of a healthy and effective LeBron James (25 points) and Davis (22). Although Russell Westbrook performed better against Phoenix (15 points, nine assists) than he did against Golden State (eight points, 4-of-13 shooting, four assists), he still remained plagued with poor shooting (6-of-15), fouls (four) and turnovers (four).

After excelling at the top of the league in defense during Vogel’s first two seasons, the Lakers have struggled both on perimeter and interior defense. Amid injuries to Trevor Ariza, Wayne Ellington, Talen-Horton Tucker and Kendrick Nunn, the Lakers lack wing depth. Despite having DeAndre Jordan, Howard and Davis as options at center, the Lakers offered little interior presence against Phoenix.

“It says we want to be 2-0, and we’re not. That’s all it says,” Vogel said. “We have a great group of guys that like each other. Our process is really strong. We have a good system on both sides of the ball and we’re going to have a hell of a season.”

Since that has not happened yet, the Lakers could not help but express frustration.

Kent Bazemore, Davis and Vogel all collected technical fouls amid frustration with the officiating. James disagreed with receiving a Flagrant Foul 1 after officials determined he planted his feet improperly on a closeout. And Lakers forward Rajon Rondo had a courtside fan ejected late in the game, which Vogel said stemmed from the fan putting his hand on him.

How could such an experienced team do so? They spent all training camp dismissing their age-old roster and extolling the team’s collective wisdom. They highlighted Westbrook’s playmaking could reduce the burden on James and Davis. They believed established players on veteran minimum deals, including Carmelo Anthony, Rondo and Howard, would fulfill positional needs far better than when a young roster could offset injuries to James and Davis during the Lakers’ first-round exit last season to Phoenix.

“This was the team that put us out of the playoffs. We were already agitated about that they beat us (in) the playoffs,” Howard said. “So we were like, ‘Man, not tonight. We just have to control our emotions and figure it out. We got 80 more games.”

In only two games, though, the Lakers have already fractured a bit. Time will tell whether the efforts Davis and Howard took to mend fences will lead to growth or more self-destruction.

Mark Medina is a senior writer/analyst for NBA.com. The views on this page do not necessarily reflect the views of the NBA, its clubs or Turner Broadcasting.