A compilation of rare gems of NBA moments that we love to see in an already unusual season. 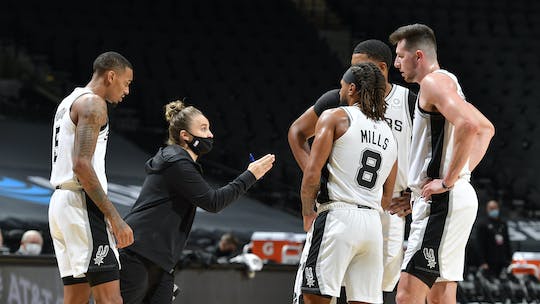 The 2020-2021 NBA season is pinned with several asterisks to kick things off—from the altered live game experience, to a string of postponed games, to the lack of Klay Thompson highlights, and so on. Also in this growing list are asterisks of the rare, odd, historic, and extremely interesting nature, which is to say these are asterisks of moments that we love to see.

Here are eight of those moments:

Those three words from San Antonio Spurs head coach Gregg Popovich, on the surface, was simply a direct order to his assistant Becky Hammon to take over coaching duties after he was ejected in the second quarter versus the Los Angeles Lakers. Dig deeper and it means so much more than that. With those three perfect words, Hammon became the first woman to coach an NBA team.

Hammon was also the first full-time woman assistant coach in league history, but Popovich has said that the Hammon coaching hire back in 2014 wasn’t “to make history.” Except it truly is historic. What the hiring did was open doors for many Becky Hammons in the NBA. Last season, 11 women got seats on the bench as part of coaching staffs across the league. That’s the good news. The better news is that as Pop’s top assistant, Hammons is well on the way to become the first full-time woman head coach in league history.

Blowout games are only 50 percent fun. On one end, a team is playing perfect basketball; on the other, a team simply can’t throw the ball in the ocean. Historic blowout games, however, are built differently. These are the games where everything is in the superlative: the best, the largest ever, the biggest, and, yes, the worst.

All of these were present in the game between the Dallas Mavericks and the Los Angeles Clippers, where the Mavs led the Clippers by 50 points at halftime, 77-27. That’s never happened before in the history of the NBA. Dallas kept it going (and LA quite the opposite) that by the final buzzer, the Mavs notched its second biggest win in franchise history with a 51-point fireworks display. The Kawhi Leonard-less Clippers, meanwhile, faced their worst loss in franchise history.

Two important things to note here: 1) the Clippers only scored 46 points in the second half, which meant that if the Mavs decided to just let Luka Doncic and company dribble away all the remaining possessions and not score at all in the last two quarters, they would’ve still won by four; and 2) Clipper Nation probably wouldn’t want to talk about this game ever again, so let’s respect that. Next!

One of the most awesome things missing from last season was Steph Curry’s signature move. No, not the one where he pulls off dance moves in both a smooth and vicious manner before—and after—launching a three-pointer, but the one where he injects overall positivity into every aspect of the game.

That’s why Steph making NBA history yet again was such a joy to witness. It was nearly impossible not to break into a smile after watching him splash 3-pointer No. 2,560, tying Reggie Miller at third on the all-time list. When he hit this milestone, Steph put up 3-1 with his fingers to smoothly pay respects to Miller (it wasn’t a reference to that other 3-1 thing, stop that). He then viciously hit two more threes to secure the second seat at the all-time great shooters table.

Still sitting comfortably at the throne is Ray Allen’s 2,973 career 3s, but if a healthy Curry continues this frenetic, 3.5 three-pointers per game pace, the all-time record will be his by next season (or the season after next, in Klay Thompson’s estimation). On top of that, Curry’s contribution to the game transcends numbers, in that a next generation of shooters would be putting up 3-0 with their fingers in the foreseeable future.

The Orlando Magic shot the lights out in a game versus the Charlotte Hornets, connecting on six 3-pointers over a four-minute stretch. But that scorching 21-2 run wasn’t even the most awesome thing that happened that game.

The top highlight came even before tipoff, when referees Natalie Sago and Jenna Schroeder were picked to work the game together. Sago and Schroeder became the first ever two-women referee crew in NBA history. There are seven female officials working the games this season, which is a season-high for the NBA.

There was a string of games in January where Atlanta Hawks big man Clint Capela got very busy. Here’s a look at the atrocities he inflicted:

In that four-game span, Capela averaged… (*opens calculator app*) (*does the math*) (*calculator app crashes*) pretty intense numbers. His superhuman energy is eerily reminiscent of NBA legend Dikembe Mutombo, who was coincidentally the last Hawks player in 20 years to record a triple-double including blocks. The last player to do the rare 10-block triple-double was Anthony Davis in 2018, when he was still a Pelican.

Capela is on such a dominant run that it’s becoming tougher and tougher to deny entry to the young Hawks in the playoff contention conversation. Even Mutombo can’t finger wag that.

Speaking of triple-doubles, let’s talk about Nikola Jokic. While Capela is hanging on the center position for dear life and taking a noble stand for the traditional big man, Jokic is out there freestyling. In 20 games so far, Jokic is averaging close to 27 points, 12 rebounds, and nine assists per game. He’s collecting triple-doubles with five already, just one short of current triple-double league leader Luka Doncic.

The Joker is redefining what it means to be a big man in today’s NBA. He pump fakes a 3 and inexplicably gets to the rim every chance he gets. He moves in a game speed set to Sunday afternoon but comes in hot with the inevitability of a Monday morning, which is a fancy way of saying he looks really chill but you just can’t stop him.

In one possession against the Utah Jazz, Jokic received the ball at the top of the arc, took a quick glance at the shot clock at the opposite side of the court (it said six seconds), gave his defender Derrick Favors a mini jab step, then nonchalantly swished a 3-pointer. On the next possession, he took Rudy Gobert off the dribble, starting all the way out the right wing, taking two power dribbles with his left hand before spinning to his right for an awkward-looking floater. Next time down, he backed down on Gobert (sorry, two-time Defensive Player of the Year) and dribbled with his left again before spinning to his right for a reverse layup without really taking off. This was the game where he dropped 22 points in the first quarter alone—scoring on threes, floaters, and layups with the enthusiasm and flair of someone buying groceries.

If the season ended right this instant, the New York Knicks will be in the running for the eighth playoff spot in the East. If you’re a Knicks fan, that sentence alone is enough reason to throw a (Zoom) party. Not that the bar is that low, but it’s simply because the Knicks are becoming actually fun to watch. Some things you love to see:

There are so many layers to this towering cake of Knicks relevancy and it’s interesting to see if the cake topples over by the second half of the season or if this entertaining version of the Knicks is yet another byproduct of the new normal.

Luka Doncic doing things with the basketball—you simply love to see it.