Everything you need to know about the WNBA playoffs

The WNBA playoffs begin this week! Here are answers to some frequently asked questions about the league’s postseason format, qualification, structure, and schedule. 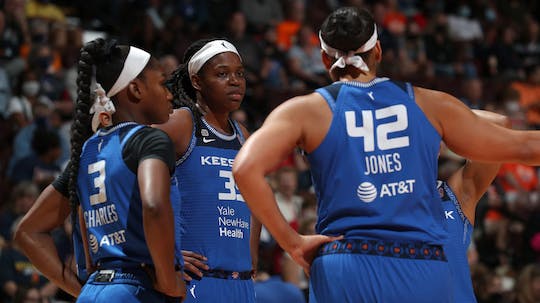 The Connecticut Sun finished the regular season as the top seed.

Which teams are headed to the WNBA playoffs?

The top eight teams after the regular season made it to the playoffs.

What was the procedure used for breaking ties?

In this year’s playoffs, the Liberty, Mystics, and Sparks ended up in a three-way tie for eighth place with identical 12-20 records. The Liberty clinched the last playoff spot because they had the best head-to-head record among the three teams.

In order to break a tie between two teams, the following criteria are utilized in the order set forth:

Unlike the NBA, the WNBA does not follow a two-conference format for the postseason. The top eight teams with the highest winning percentages qualify, regardless of conference, and they are seeded based on their record.

How many rounds will the playoffs have?

How many games will take place in each round?

For the first round, only the 5th to 8th teams will compete in a single-elimination game. This year, the Mercury (5th) will host the Liberty (8th), while the Sky (6th) will host the Wings (7th).

The semifinals and the WNBA Finals both follow a best-of-five format.

Which are the home games for the semifinals and the WNBA Finals?

The top two teams that received a double bye will host Games 1, 2, and 5 of the semifinals.

This means that the Sun (1st) will host the lower seed second-round winner, while the Aces (2nd) will host the other remaining team, in Games 1, 2, and 5.

The WNBA Finals will also have the same 2-2-1 hosting format.

When did the current playoff format start?

The current postseason format, along with the playoff seeding and qualification procedures, has been in place since the 2016 WNBA season.

From 2000 to 2015, the top four teams in each conference qualified for the playoffs and were seeded in brackets that are similar to the current NBA format. The semifinals and the WNBA Finals followed a best-of-three format, but the WNBA Finals shifted to best-of-five from 2005 and retained it to this date.

What are the key dates in the WNBA playoffs?

The WNBA playoffs will kick off on September 24 (PHT). The last possible date of the WNBA Finals is October 20 (PHT).

The #WNBAPlayoffs bracket is set ?

Where can fans from the Philippines watch the playoffs?

You can catch all the WNBA games live through the WNBA League Pass.