CJ McCollum will lead the shorthanded Pelicans tomorrow against the Heat. 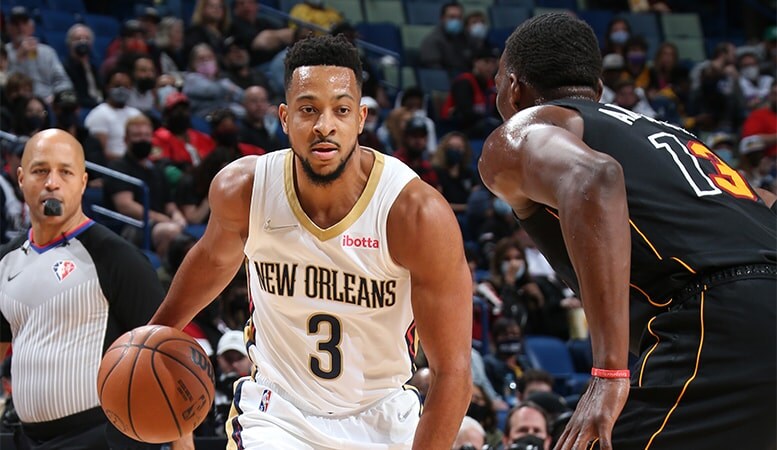 Early in December, the Heat were in trouble. They were 11-14 and were out of the playoff picture completely. To make matters worse, they just couldn’t get their entire team on the floor at the same time. Jimmy Butler, Bam Adebayo, Tyler Herro, and Kyle Lowry all missed several games and couldn’t get into a rhythm together.

Miami is a team that prides itself on its culture and having several players that could step up when needed. So with their key players missing the time they leaned on guys like Max Strus, Victor Oladipo, Gabe Vincent, and Dewayne Dedmon to fill in the spots.

The Heat culture prevailed and those role players answered the call. Even though they were undermanned, Miami managed to pull themselves out of their hole and are now 24-21 and a game away from the sixth seed.

They haven’t had a season-changing winning streak like the Brooklyn Nets but they’ve strung together wins when needed to keep chugging forward. The Heat are slowly getting healthy after they welcomed back Herro and Adebayo in their past few games. With their core back together and their role players gaining confidence, the Heat might be primed for a big playoff push. That could start with a win over the New Orleans Pelicans.

It seems like the Pelicans are pulling a reverse-Heat this season.

Midway through December, New Orleans was one of the best teams in the West. They pulled off a five-game winning streak and were 23-12. Even though they were playing without Brandon Ingram, the Pelicans looked like they were the healthiest they’ve been in seasons. That’s because Zion Williamson wasn’t just playing, he was dominating.

Then the new year rolled along and Williamson injured his hamstring, keeping him on the shelf for the next three weeks. Herb Jones, another productive player, has missed several stretches due to a back injury. With Ingram still working his way back from the toe injury, the Pelicans were without their three key players.

The workload from those missing players has just been too much for the Pelicans to handle. They’re 3-6 since their mid-December winning run and have had difficulty dealing with other playoff teams. Their three wins have come against non-playoff teams.

It looks like it will be a couple of weeks more before Williamson and Ingram can rejoin the team. The good thing is they’re going up against several non-playoff teams during that stretch. However, one of the few better teams they’re up against is the Heat. New Orleans needs a morale-boosting win and getting one over Miami might be the answer.

This is going to be a battle of role players. Strus and Oladipo have been big for the Heat while Lowry and Herro were out. Strus is putting up  career numbers (13.1 PPG) with the bigger minutes he’s been getting this season. Oladipo has settled nicely into his sixth man role and is finally getting his groove (11-3-4) after returning from a major injury.

With Lowry still out and Herro fresh off the injured list, these two will be counted on again to play big for the Heat.

The Pelicans on the other hand have relied on two young guns. Naji Marshall and Trey Murphy III have occupied the forward positions that Williamson and Ingram have vacated. Both have been solid (23.2 PPG combined). But for New Orleans to get the win, they two have to be spectacular, close to the level of Williamson and Ingram.

If this match-up happened back in December, the Pelicans would have won this, easily. Unfortunately, the tables have turned. Miami is marching into New Orleans with Butler, Adebayo, and Herro in tow. CJ McCollum is doing his best to keep the Pelicans in flight but he can’t weather the firepower of the Heat alone.

You can catch the Pelicans face the Heat live on NBA League Pass at 9:00 AM or catch the delayed telecast on NBA TV Philippines at 12:30 PM.

The Indiana Pacers and Memphis Grizzlies face off as both teams try to get back into the win column at 7:00 AM on NBA League Pass.