Fear the ‘Fro: Ben Wallace goes from undrafted to Hall of Famer

Pistons legend Ben Wallace worked his way to a Hall of Fame career through his elite rebounding, blocking, and defensive skills. 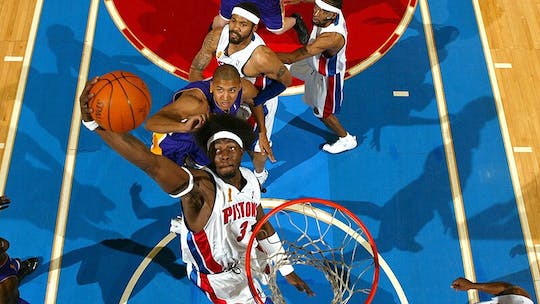 I can’t explain it, but after a Ben Wallace one-handed rebound or a Ben Wallace rejection, you’d want to pound your chest and flex your biceps. If a Steph Curry shooting highlight elicits a head shake from sheer disbelief, then a Ben Wallace defense mixtape will make you want to bang your head and growl.

That speaks volumes of Big Ben’s intensity when he’s on the floor, but he’s so much more than just an intense, out-of-control, all-brawn basketball player.

It’s easy to get lost in his powerful afro (which we will get to in a bit), the arm bands, the enormous biceps, the character worthy of a WWE-style entrance and storyline.

Because, really, check out the ‘fro. It has that ‘70s vibe with the right amount of modern flair to be stylish while striking fear in opponents. The way it proudly bounces up and down as Wallace gets high for a two-handed tip dunk, it’s almost unfair that he gets to look this cool, this awesome, and this dangerous.

Because, really, what’s understated about Wallace is his high basketball IQ. Having the body to go toe-to-toe with a 300-pound truck like Shaq is one thing; having the intelligence to pick your spots is another.

He’s not even 6’10”, but Wallace led the league in rebounding twice and is the Detroit Pistons’ all-time leader in blocks. In an era when he battled with Shaq, Tim Duncan, and Kevin Garnett, he more than held his own — he dominated.

He didn’t even have to score in double-figures to do it. He just did what your average human wouldn’t be psyched to do: the dirty work. And he did it at such an elite level, he just had to be rewarded with four Defensive Player of the Year awards (only Dikembe Mutombo has the same number).

There was a time during his peak Pistons days when his teammates—and even coach Larry Brown—would wear afro wigs because, again, have you seen that ‘fro? The whole arena got in on the act and wore afro wigs to games. That was the Ben Wallace effect off the court.

On the court, Wallace influenced an entire culture. This undrafted, unknown “big man” worked his way into the league. He lifted weights on draft night while his peers were being picked one by one. He worked on turning his body into rock solid shape.

He was at the center of a rugged and tough Pistons team, which despite all the odds, defeated a stacked Los Angeles Lakers team to win the NBA championship. He did it without trying to be cute with the basketball. In every minute of every game, he just went smart and hard.

That’s a Hall of Famer right there.