Finals Flashback: The one the LA Lakers want to forget

No one expected the Detroit Pistons would beat a stacked Los Angeles Lakers squad for the 2004 title. If you dig deep into the treasure trove of NBA Finals stuff, there’s one thing that’s gathering dust at the bottom. This finals series is rarely talked about, neglected, and if only history allowed it, would be erased in the minds of Los Angeles Lakers’ fans.

This is the 2004 finals series between the Lakers and the Detroit Pistons.

Showtime versus the Bad Boys had been a thing of the past. In 2004, it was a stacked LA roster against a group of scrappy Pistons. First, let’s look at the stacked: Shaquille O’Neal, Kobe Bryant, Karl Malone, Gary Payton, and Devean George.

One look at that and you can almost guarantee the winners, right? Wrong. In what turned out to be a mismatch disguised as a classic underdog story, it was the Pistons who came out the stronger, more cohesive team. The “no superstar” narrative for Detroit worked in their favor because guess what? They were all superstars.

If not for a Kobe Bryant Game 2 moment in its purest form, the Lakers would’ve been swept.

Best game of the series

Which leads us to the best game of this very short NBA Finals series. After a very low-scoring, anti-buckets Game 1 (which Detroit won, 87-75), Game 2 proved to be an exciting one. The only exciting one.

With the Pistons threatening to go up 2-0, Kobe rose for a game-tying 3 over Hamilton, sending the game into overtime. The Lakers eventually won by eight points, 99-91. The Pistons won three straight after that.

Game 2 was the best of the series because it was really the only game where the Lakers showed they had a fighting chance. All the other games were exercises in suffocating defense and extreme lockdowns. Unless you’re a hardcore Pistons fan or someone who enjoys brain-stumping puzzles, then those games must’ve been fun for you.

But if you’re a good-natured basketball fan who has an appetite for back-and-forth buckets, then this finals series only had Game 2 for that.

Kobe’s game-tying 3 was definitely a memorable moment, if only for the reason that this was definitive proof of the early stages of Mamba Mentality. Kobe just wouldn’t allow not putting up a fight.

The most memorable moment of the series, however, was each time 6”9’ Ben Wallace would try to defend 7”1’ Shaq in the post. Wallace wouldn’t always succeed (that’s Shaq, after all), but he would always sacrifice life and limb to make every possession his own version of a living hell.

Shaq was held to only 14 points in the Game 3 blowout loss. That was the game where Big Ben decided to dedicate all his muscles in the attempt to slow down the Diesel. 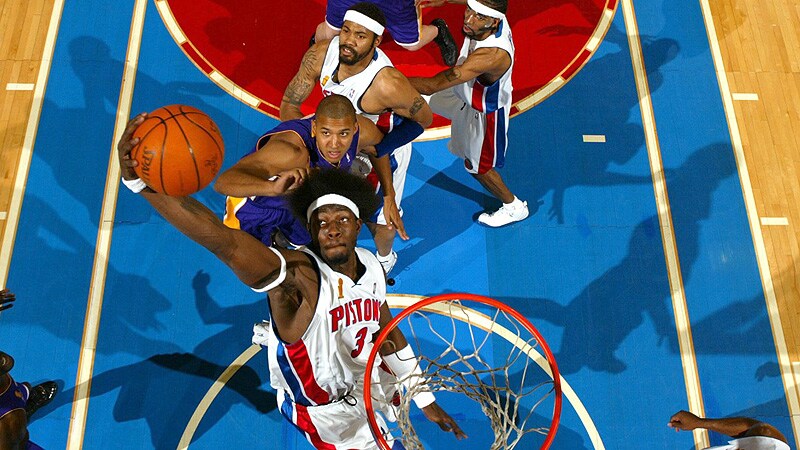 Which leads us to the X-Factor MVP: Ben Wallace.

He’s the obvious choice, the easy choice, and no doubt the correct choice. Billups deservedly won Finals MVP while Hamilton steadily carried the scoring load. Sheed brought the attitude while Prince kept the pieces glued together. But, Ben.

Ben Wallace was the ultimate Detroit flex, personifying what the Piston brand of basketball meant in ‘04.

RELATED: Ben Wallace goes from undrafted to Hall of Famer

His defense was topnotch, sure, but more than that was the culture of never-backing-down that he established.

Forget double-teaming Shaq and letting the Lakers’ offense go crazy. Let me guard him one-on-one, Wallace said, and let the chips fall where they may.

Which leads us to a Pistons’ championship after 14 years. This series cemented Billups, Hamilton, Sheed, and Prince as elite superstars. It was the vehicle for Big Ben’s journey to the Hall of Fame.

For LA, this series was the one that changed the course of Lakers history.

A month later, Shaq was traded to the Miami Heat, closing the book on one of the greatest duos in league history. Payton was traded to the Celtics. Karl Malone, who was battling injuries, retired months later without a ring.

Kobe and the Lakers eventually made it back to the top years later, and this finals series was never to be spoken of ever again.