Ten years ago, Derrick Rose became the youngest player in league history to win the Most Valuable Player award. 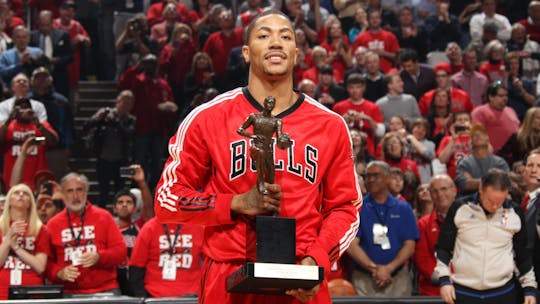 Those words came out of the mouth of the shy and bashful incoming third-year guard of the Chicago Bulls, Derrick Rose, around 10 years ago.

In his first season in the NBA, Rose won Rookie of the Year and gave the defending champions Boston Celtics a scare in the first round of the 2009 playoffs. In his second year, Rose was named an All-Star for the first time in his career.

Rose, up to that point, was one of the most exciting young players to watch in the game. His athleticism, handles, and quickness made him one of the most breathtaking players to watch, particularly with how he contorted his body in different ways to avoid defenders and slither his way to the basket. The explosiveness in a 6’3” frame was something the league hadn’t seen in a long time.

But excitement over Rose’s game didn’t translate to success just yet. Though the Bulls made the playoffs in both of Rose’s first seasons in the NBA, they were eliminated by the Celtics in the first year, then unceremoniously got eliminated by LeBron James and the Cleveland Cavaliers in the next.

But Rose wasn’t on the clock yet the way that talented youngsters in their 3rd or 4th season in the NBA were. People were still in the honeymoon stage of their love for Rose because of how he made every Bulls game a must-watch.

And it was that mindset that made Rose’s hypothetical question so endearing. In the midst of James’ ascension as the league’s best player, a potential three-peat for Kobe Bryant and the Los Angeles Lakers, and the emergence of Dwight Howard as the best big man in the NBA, how could Rose, still a puppy and only 21 years of age, even think about putting himself in the MVP conversation?

Was he an awesome player? Without question. Did he have a stacked team? With 20-10 machine Carlos Boozer joining the team in the offseason, a host of gritty defenders in Joakim Noah and Luol Deng, and a maniacal defensive-minded leader in Coach Tom Thibodeau, possibly.

But MVP? For a 21-year-old? Come on. Let’s be real. That’s not how the league works. You get in line, and wait for your opportunity as superstars of the league take the main stage. You work hard, make a name for yourself through playoff success, and only then can you rise up the MVP rankings.

But a funny thing happened. That hypothetical question from Rose? It turned out to be a prophecy. 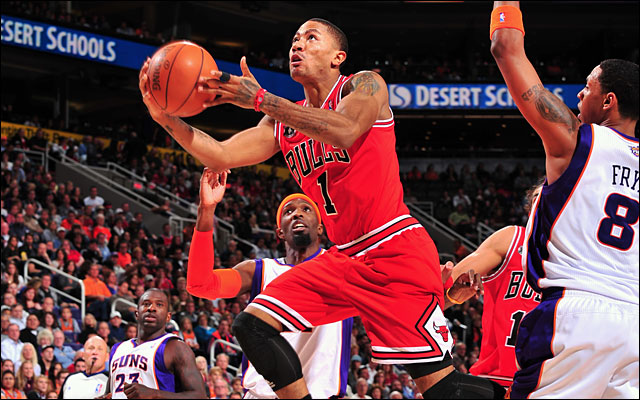 The Bulls absolutely stormed through the league, finishing with an astounding 62-20 record, which was a 21-game improvement from the previous season. Chicago’s record was also the best in the entire league — better than the record of the defending champion Lakers, the newly-formed Big Three in Miami, and even the ever-awesome San Antonio Spurs.

While the arrival of Boozer helped diversify Chicago’s offense, and the bench mob led by Kyle Korver gave the team some much needed depth, everyone knew who was the key to the entire team. It was Rose. He was the first, second, third, fourth and fifth option on offense. Deng, Noah, and Boozer all played to help strengthen Rose. Their defense held serve, which allowed Rose to lead the offense and overcome teams.

And with Rose’s higher usage came stellar numbers: 25.0 points, 4.1 rebounds, and 7.7 assists per game. The efficiency wasn’t on par with other MVP contenders, but the fact he put up those numbers while being the primary player opposing teams planned for says something about his ability to create for himself and his teammates.

Were other players having excellent seasons? Without question. The Heat were still in the growing pain stages of figuring out life with three superstars, but there was no doubt that James was an incredible player. Ditto for Howard, who was also the center of the Magic’s solar system in his own way.

In fact there have been many pieces written about how those two players should have been and were more worthy candidates than Rose.

But Derrick Rose had something else. Not only did he have the team record and good numbers to back it up, he had those eight words in the bag. Those eight words made people look at him and chuckle, wondering why someone like him would bluntly say something like that.

And as a result, Rose exceeded every single expectation laid before him. He didn’t just show that he could potentially be an MVP, he showed that he deserved to be an MVP. For one magical season, Rose stood toe-to-toe with some of the greats in the game, and left them all in the dust.

Almost a decade ago on May 3, 2011, Rose hoisted up the MVP trophy. He became the youngest player in league history to win the award at the age of 22 years and 191 days, surpassing Wes Unseld who was 23 years and 9 days when he won the MVP in 1969.

It was quite the culmination for Rose. An audacious question, followed by an even more audacious season. Succeeding years showed that this would be the pinnacle of his professional career, but we didn’t know that at the time. When Rose was named MVP, that was his one shining moment as injuries and personal issues followed him in the succeeding years.

Today, Rose is with the New York Knicks as a backup point guard and a mentor to young pups like Elfrid Payton and Immanuel Quickley. He’s averaging 13.6 points and 4.1 assists and has been doing his role to help the Knicks return to relevancy and secure a spot in the playoffs.

He’s not the same player he was at the mountaintop 10 years ago. But that’s okay, because everything that climbs up goes down eventually.

But in 2011, when Rose asked why he couldn’t be the MVP, that proved to be the first step to one of the most miraculous climbs the league has ever seen.
Read Next
Feature