In honor of Noelle Quinn's recent appointment as Storm head coach, we listed down some former WNBA players who transitioned into coaching in the league. 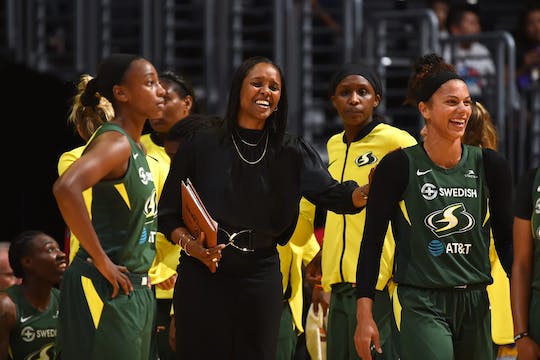 Once players decide to hang up their sneakers, their path gets a lot wider. Some decide to enter broadcasting, others move on to a completely different field.

Understandably, there are many who can’t let go of the sport they love and cherish, making them consider a career that will keep them embedded in the game.

Coaching may seem like an obvious step for retired athletes, but it’s not always an easy transition. Not to mention, opportunities may not be as readily available. In the WNBA, for instance, there have been calls to open up coaching positions for more women and retired players. This season, there are only five women head coaches out of the 12 teams.

Here are some former WNBA players who can hopefully pave the way for more women coaches in the league:

Plenette Pierson, Rebekkah Brunson, and Katie Smith all made the transition from the court to the sidelines. All three players spent years playing for the Minnesota Lynx and are now part of the coaching staff.

Brunson, on the other hand, spent a huge chunk of her career with the Lynx. She played there from 2010 to 2018, getting four of her five championships in Minnesota. Known as a defensive specialist, Brunson was part of the WNBA All-Defensive first team once and second team five times. She also made the All-Star team four times in 15 seasons.

Former New York head coach Katie Smith also returned to the Lynx franchise as lead assistant. Smith is one of the reasons Minnesota has achieved great success. She was an All-Star for five of her six and a half seasons playing for the Lynx, and led the team to their first ever playoff appearance in 2003. Smith became the first female basketball player to score 5,000 points in a US professional career. She also led the WNBA in 3-pointers made for 3 years.

Smith helped build the “win or go home” culture, which is why she was considered a perfect fit for the Lynx coaching staff. She was hired immediately after she parted ways with the Liberty franchise “because she’s good, not because I felt bad for her, not because she played in Minnesota,” according to Cheryl Reeve, Lynx head coach and general manager.

After spending years with the Las Vegas Aces, Vickie Johnson is now running the show for the Dallas Wings. Johnson played in the league for 13 years, four of which were spent with the San Antonio Stars. She became the franchise’s head coach in 2017, the Stars’ final year before being sold to a new owner and relocating to Las Vegas.

Dallas needs all the guidance they can get from a veteran player and coach. The Wings are an extremely young team, with their average age of 24, so having a coach like Johnson who had spent many years both on the court and the sidelines can help boost the team.

At one point, Johnson became the only active female Black head coach in the league, which was extremely meaningful for her.

A former #WNBA player. A return to the coaching helm.

Join us in congratulating Vickie Johnson on becoming the next head coach of the @DallasWings! pic.twitter.com/SLOXW0YzLn

"It's very important for me as a Black woman to be a role model. Not only for the Black athletes in our league, but also for the white athletes as well. For all players. I am a coach, and I take pride in that every day," Johnson said in a media availability after her appointment as Wings coach in 2020.

"I knew I was head coach material," she continued. "I didn't want to be an assistant all my life. [But] I didn't want to coach just any team. The biggest thing for me [is] just looking at the roster and the possibility. These young players have accomplished a lot of things in a short period of time, and I want them to continue to grow as people and as players.”

Seimone Augustus was the No. 1 overall pick in the 2006 draft and became a decorated guard for the Lynx. She spent 14 seasons in Minnesota before transferring to the Los Angeles Sparks in what turned out to be her final season in 2020.

Mone is considered one of the best guards in WNBA history, and she has the accolades to back it up. Upon entering the league, she made a lot of noise by averaging 21.9 points, 3.8 rebounds, and 1.5 assists, which eventually led to her Rookie of the Year award in 2016.

She earned four championships with the Lynx and became the Finals MVP in 2011. She is an eight time All-Star, three-time Olympic gold medalist, and a FIBA gold medalist. She is also the tenth player in league history to reach 6,000 points and is part of the top 10 all-time scoring list of the WNBA.

And now Assistant Coach for the Los Angeles Sparks

"Seimone Augustus is one of the greatest basketball players to ever step foot on a court," Sparks general manager and head coach Derek Fisher. "Her impact as a pioneer in our sport can be seen through all the players and people she's impacted in this game. It's been an amazing honor to work with her over the past year and we're excited to add all of her wisdom to our coaching staff."

She is now serving as an assistant coach for the Sparks following her retirement earlier this year. "It's an honor to continue to serve the game that has given me so much," Augustus said in a statement. "I'm excited to join the Sparks staff and look forward to developing in this new role."

If you’ve seen Noelle Quinn’s name pop up recently, it’s probably because you browsed the most recent coaching headline. Yes, another WNBA player is taking charge not just for any WNBA team, but the title favorite and defending champion, the Seattle Storm.

After the legendary Dan Hughes announced his retirement on Sunday, Noey was given the opportunity to step up and become the head coach of one of the best teams in the league today. Not long ago, Noey was playing for the Storm team that eventually won the championship in 2018.

"Obviously this happened very quickly," Quinn said, "but just super honored and appreciative that I have the support from the team, from the organization. They see something within me. I'm entrusted to lead this team. It doesn't go unseen that they are instilling this confidence in me."

She retired after spending 12 years on the court and immediately joined Seattle’s coaching staff. It was here that the soft-spoken Noey excelled, thanks to her unbelievable basketball IQ and understanding of the game.

"Our last year playing together, 2018, there were multiple times where maybe we're in a timeout, maybe we're coming on to the floor and she's like, 'Hey, you might want to run this play because this team is doing this.' Countless times. So I think when I say more than ready, it comes from these little glimpses that I've gotten in terms of the little nuggets that she might give me throughout a game,” Storm veteran Sue Bird said.

Not only is this move important for the former player and her team, it is also a historic step as Noey becomes the first Black head coach of the Storm.

“I think it's important for young Black girls to see women of color, Black women in leadership roles because you understand you can be more than just a basketball player. You can be a coach. You can be a GM. You can own a team," Quinn said about the milestone.

From former player ?? to Assistant Coach ?? to Head Coach

Join us in congratulating Noelle Quinn for being named the Head Coach of the @seattlestorm 👏 pic.twitter.com/YvpSvYpzaD

But before she can celebrate, there’s a lot of work to be done. The Storm have the best record in the league at 6-1 and are on the right track so far in their title defense. With Quinn at the helm, the franchise is hopeful that they can replicate their success in the previous season.

Regardless, the move from player to head coach in three years is already a feat in itself, and Quinn is beyond proud of the impact of her accomplishment.