The standout rookies take home the honors for the month of December. 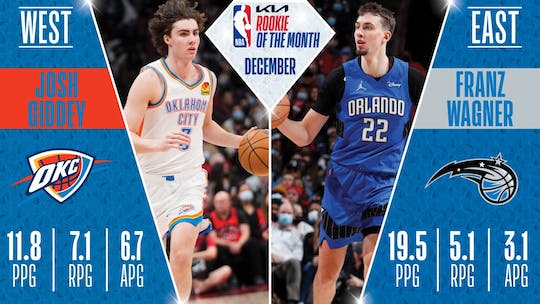 Oklahoma City Thunder guard Josh Giddey and Orlando Magic forward Franz Wagner have been named the NBA Rookies of the Month for December.

Check out highlights from their standout play in December.

Giddey continues to lead all rookies in assists per game (6.4 apg) and ranks third in rebounds (7.3 rpg) and is No. 8 in scoring (11.0 ppg). He recently became the youngest player in NBA history to log a triple-double and in December averaged 11.8 ppg, 7.1 rpg and 6.7 apg and amassed three double-doubles.