The two-time MVP underwent an MRI on Thursday (PHT) that confirmed the diagnosis of a hyperextended left knee with no structural damage. 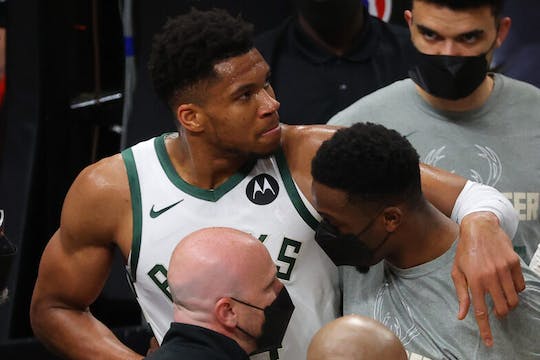 MILWAUKEE (AP) — Milwaukee Bucks forward Giannis Antetokounmpo is doubtful for Game 5 of the Eastern Conference finals on Friday (PHT) after undergoing an MRI on his injured left knee.

Bucks officials said the two-time MVP hyperextended his left knee in the third quarter of a 110-88 Game 4 loss to the Atlanta Hawks on Wednesday. The Bucks announced Thursday that an MRI confirmed that diagnosis and said he’d be listed as doubtful for Friday's game.

“When you talk about the range of possibilities, I think where this has landed has to be looked at as a positive,” Budenholzer added. “It’s still a really difficult fall.”

Antetokounmpo was attempting to block a dunk attempt by Atlanta’s Clint Capela when he landed awkwardly. He clutched his knee in obvious pain and remained down for several minutes before walking slowly to the locker room.

He briefly went back to the Bucks’ bench and then returned to the locker room shortly afterward.

The Bucks and Hawks are tied at two games apiece in the Eastern Conference finals heading into Game 5 on Thursday in Milwaukee.

Antetokounmpo has been averaging 28.2 points, 12.7 rebounds and 5.2 assists in the postseason. Milwaukee went 6-5 in the 11 regular-season games Antetokounmpo missed, including a stretch of six straight games in April when he also was dealing with an injured left knee.

The Hawks have their own injury issues.

Star guard Trae Young missed Game 4 with a bone bruise in his right ankle, and center Clint Capela took an elbow in the face late in the game. Hawks coach Nate McMillan didn’t have an update on either player when he spoke to the media Thursday morning.
Read Next
Feature